How does ammonia react with sodium

Equipment:
Chemicals:
Hazard warnings:
Attention! Do not breathe ammonia vapors. Work under the hood! Wear protective gloves when working with sodium.
Execution:
A round bottom flask filled with liquid ammonia is removed from the Dewar and attached to the stand. The glass stopper is lifted and a piece of debarked sodium is thrown in with tweezers. 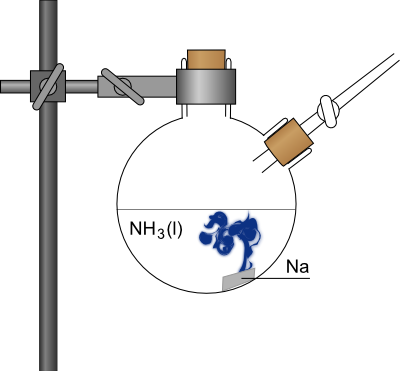 (SVG)
observation
The sodium dissolves in the ammonia with a deep blue color.
Explanation:
Liquid ammonia is a great solvent. Alkali or alkaline earth metals dissolve in ammonia without hydrogen evolution with a blue color. These solutions can be kept for a long time and are powerful reducing agents. The metal-ammonia solution contains solvated metal cations and electrons, in the case of sodium that is

Disposal:
Allow the contents of the flask to evaporate in a Petri dish under the hood. The solid residues are dissolved in ethanol, neutralized and disposed of at the local authority.
Remarks:
Ammonia gas produced from ammonium chloride and potassium hydroxide can be liquefied in a cold trap at -78 ° C over an isopropanol-dry ice mixture. More precise instructions can be found in the relevant literature (Lagowski, JJ (1978). "The Chemistry of Liquid Ammonia." Journal of Chemical Education 55 (12): 752-761) (Maslowsky, EJ (2000). "Microscale Synthesis of Hexaamminechromium." (III) Nitrate Using Liquid Ammonia Generated in the Laboratory. "Journal of Chemical Education 77 (6): 760-761)