What is the sound of gaensen

Migratory birds on the move: who is trolling?

The migratory birds travel a long way every year. Most species fly many thousands of kilometers. You probably know that bird species such as white storks and robins live here in Germany. Most storks spend the winter in Africa. And the robins fly to the Mediterranean!

The birds do this because otherwise they would starve: the cold, the snow and the shortness of the days make it difficult for many species to find food.

Who is flying when?

You have been able to observe bird migration particularly well since the beginning of September and until the beginning of November, because some species are then on the move during the day. These include cranes, wild geese, robins and chaffinches. They are so-called short and medium distance migrants. They fly to southwest Europe or the areas around the Mediterranean and return in February.

Some cranes also take a rest in Hesse, for example in the Amöneburg Basin or on the Ohm and Lahn rivers.

Cranes rest from October to the beginning of November, especially in northern Germany. If they start in the morning, they will also fly over Hessen in the afternoon and evening. They prefer to move along the river valleys of Central Hesse and reach the floodplains of the Main and Rhine. They fly around 50-70 kilometers per hour.

In the Rhine floodplains in southern Hesse between Kühkopf and Trebur you can also watch geese in late autumn, which are also migratory birds, but overwinter with us! They come from areas in Northern Europe where it is much colder than here. They spend the winter months in the marshland of the so-called Hessian Ried. There you can discover different species of geese: gray geese, bean geese or white-fronted geese. Some come from northern Scandinavia, others from Russia.

How do I distinguish cranes from geese?

From a distance, migrating cranes and wild geese look very similar at first glance. Both fly in so-called wedge or V formations. They use the slipstream of the animal in front of them to save energy. The bird at the top changes regularly so that it can also rest.

If you carefully observe the plumage, flight and sounds of the birds, you can distinguish between cranes and wild geese:

- The wings of the cranes have a wider span than those of the wild geese with 180 to about 220 centimeters.

- If you cannot see it from afar, watch out for the birds' legs: the long legs of the cranes protrude over the wings.

- In flight, cranes often have short sailing phases. That is, they stop flapping their wings and let themselves be carried away by the rising wind. Wild geese don't do that.

- You can also distinguish the bird species by the calls: crane calls resemble the sound of a loud trumpet, while geese, depending on the species, squeak or squeak.

Here you can listen to the calls of cranes, gray geese and other migratory birds!

Please do not scare!

If you observe resting migratory birds, keep your distance and be quiet! Because if people get too close, some animals sound the alarm and the whole swarm is blown up. That costs the animals strength! If they are startled frequently, their fat stores will shrink and they may not have enough energy for the long flights.

You can find an overview of events for crane watching on the website of the Naturschutzbund Deutschland (NABU).

Overall, the migration period extends from mid-July to December. This means that some species fly off very early, others only in late autumn. The white stork, the cuckoo and the nightingale, for example, fly south in summer. Because they have a long way to go: They fly to Africa. Hence, they are called long-distance migrants. Since most species fly individually and at night, they are not so easy to observe.

In addition to the bird species described here, there are more migratory birds. You can find out what these are in another article at ÖkoLeo. There is also a description of how the birds orientate themselves.

ÖkoLeo's texts may be used free of charge for educational and other non-commercial purposes. They are under the Creative Commons license CC BY-NC 3.0 DE. Different rules may apply to photos. The author and license must always be mentioned! Please note the information in the imprint. 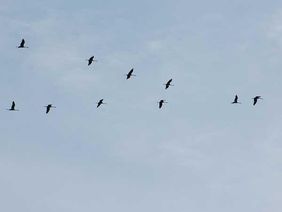