How is Google search changing us

On February 23, 2016, Google unexpectedly fundamentally changed the positions of the ads for many advertisers. Before the changeover, in addition to the 3 main ads above the SERPs, 4 other ads were listed to the right of ads and results. We had already referred to it in a blog post on February 23, 2016.

That came as a surprise to many. There had been no such drastic changes in the SERPs in the recent past. After much speculation as to what the effects could be, this post is now intended to give an actual overview of it. Are the changes in positions noticeable, negative or possibly even positive? Or has the opposite occurred and the fears were unfounded and no noticeable changes were the result.

The changes at a glance

Before the change, there were three ad fields for AdWords ads: top, bottom, right. One field has now completely disappeared - the right one.

In addition, the number of advertisements above the organic search results has been increased from 3 to 4 in some cases. Google thinks that this happens when the user and the search query are assumed to have a high purchase intention. 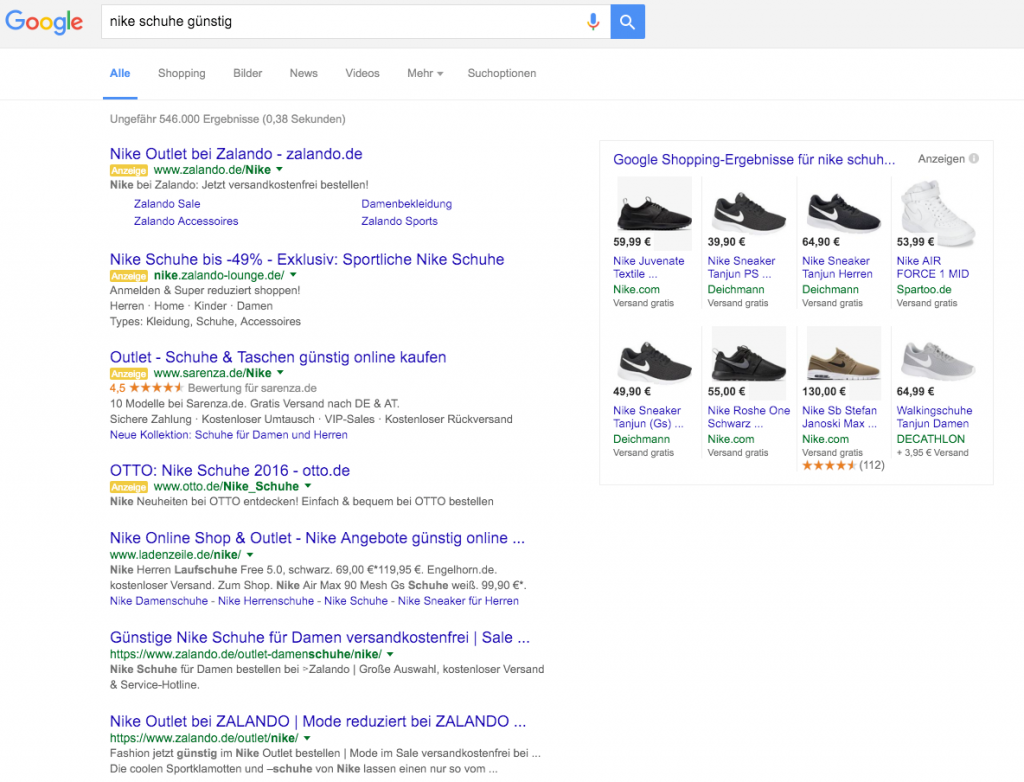 Fig. 1: New search results page - Now up to 4 ads above the organic results

The ad unit under the organic search results is now displayed with up to 3 ads. As before, the shopping results are displayed with 5 products above the text ads or - now new - on the right-hand side. And then with 8 products to choose from.

In some cases, in addition to 4 text displays, there is also the location information at the bottom, which moves the organic search results even further down. 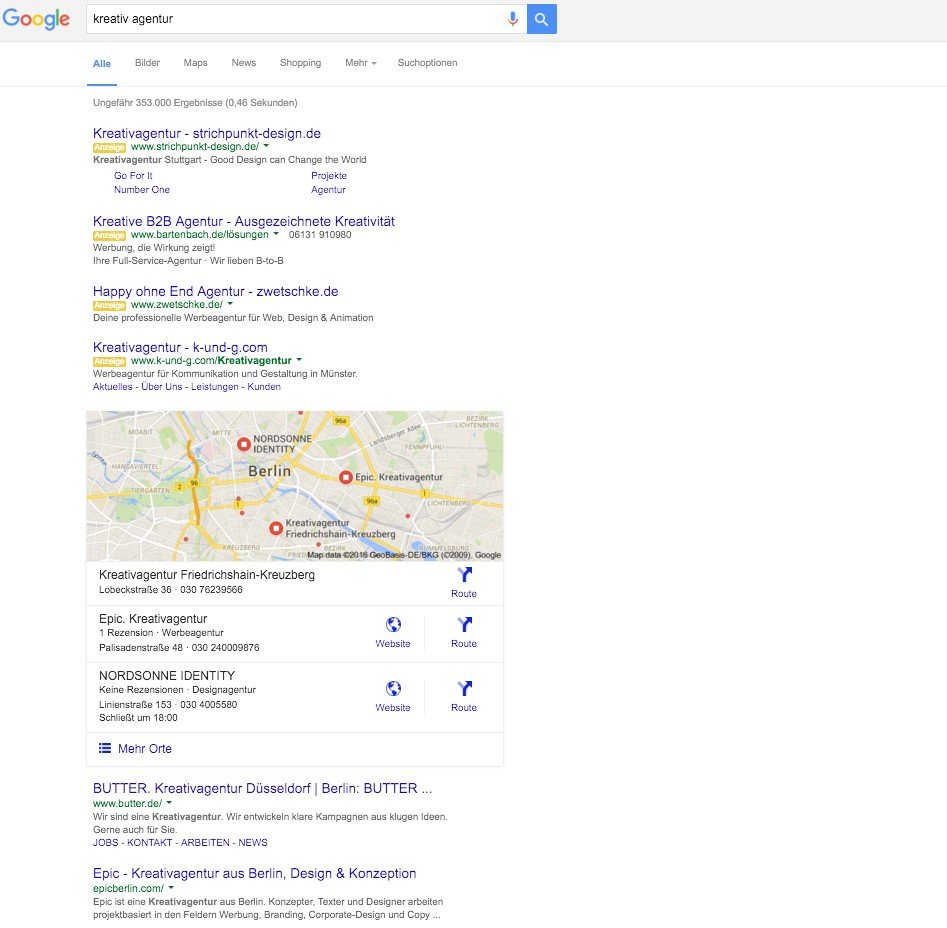 These changes are likely to have a major impact on traffic from organic search results in particular. The search results continue to slide down and are often in the area that you can only see by scrolling.

For an evaluation, we first examined our agency portfolio to determine whether there were significant differences in the key figures in the previous month and in the following month, which could be significantly affected by the restructuring. We have the periods from 26.01. - 02/22/2016 and 02/23 - 21.03.2016 compared with each other.

We analyzed the following traffic: Pure search campaigns, without shopping and display. We have also excluded the search network. Mobile traffic and tablet traffic are of no interest for the analysis, so these have also been removed. In order to focus more on auctions with several competitors and positions, we have also filtered out the brand traffic.

Table 1: Comparison of the agency portfolio

When comparing the data, it is noticeable that the average position has decreased by 25%, i.e. it has improved. The click rate has also improved by around 30%. And the click price also fell by 8.25%, which is also gratifying.

The question now remains, to what extent this data really helps to interpret the effects. CPC adjustments, seasonality or simply changes in the keyword portfolio have also influenced the data, such as the change in the ad position.

For a really meaningful analysis, the data must be filtered further. It is necessary to compare the month before and after on a keyword basis. The keywords must meet the following criteria: They must have generated a certain number of clicks before the conversion and also after the ad positions have been changed. Furthermore, your ad position must not have changed positively or negatively by more than 0.2. This is the premise to be able to rule out that a keyword previously had position 3.1, for example, and after the changeover the click bid was not increased and the position has changed significantly, e.g. to 1.9. Because this would significantly influence the click rate and also the CPC. Since the traffic used for the analysis is based on keywords, there is also no need for dynamic search ads campaigns.

The positions are summarized in 3 groups. Group of positions "1-3", "4" and "5 upwards" for all keywords with positions greater than 4. The following table shows the results of the evaluation.

And this shows a completely different picture than in Table 1. The click rate of positions 1-3 is almost unchanged. This coincides with the fact that there was no change in position here. Position 4, which is pulled from the right edge to the center, has almost twice as high a click rate. This is not surprising when you consider how it is now moving into the focus of the beholder. In addition, position 4 had no ad extensions such as sitelinks, callouts or snippet extensions before the ad changeover. These also have a positive effect on the click rate. It is astonishing that ads with positions 5 or higher also benefit from an increased click-through rate. This fact may result from the fact that up to 9 text ads were shown on the first search results page in the month before the changeover. After February 23, there will be a maximum of 7 text ads. As a result, clicks are distributed across fewer text ads and the click rate increases as a result.

The change in the average click price is also interesting. Positions 1 to 4 increase easily and up to 7%. However, it changes the most from position 5 and worse at 14%. One reason could be that the number of text ads has decreased by at least 2. Advertisers who have lost the share of possible impressions and notice this in the loss of traffic could then have increased the maximum click bids in order to compensate for the loss of traffic. As a result, the click prices change from the next higher positions.

In summary, the following conclusions can now be drawn about the change in the ad position on February 23, 2016: All positions receive a higher click rate. The winners of the changeover are advertisers in position 4, as they generate an average of 95% more traffic with only 7% higher click costs. Positions lower than 7th place used to expect less but significantly cheaper traffic. Since these text ads are no longer displayed on page 1, they should generate significantly less traffic. The other effect is that the click price has increased. Only slightly in the first positions, stronger in the lower positions. The reason could be the reduction in the number of ad spaces with the same number of advertisers. Since we have used a very large keyword portfolio as a data basis, every advertiser should above all analyze his top keywords and also text ads with position 4 or higher for changes. The traffic from the organic search results should also be monitored. The first places are now also outside the visible area. In conclusion, it remains to be said that Google in particular should not have any disadvantage from more ad clicks and higher click prices.

Inquire now free of charge and without obligation: