Why is the night so special 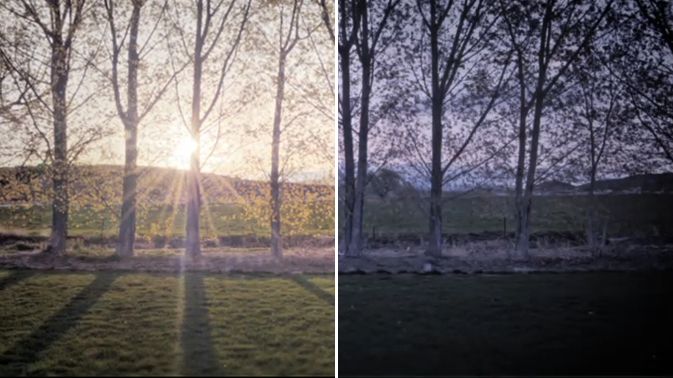 Seeing in glaring sunlight and in the deepest night darkness - the visual system can do both. The eyes adapt to light intensities that are several powers of ten apart in various ways.

When you step out of a dark room into a bright summer day, the eye is initially overwhelmed by the amount of light: saturated, as it is called in technical jargon. But then the light adaptation takes place within five to ten minutes. First, the pupil is made narrow in order to limit the incidence of light. Then the changes in the retina that accompany dark adaptation are reversed. In addition, the calcium concentration in the outer segment of the cones influences the photopigments and the effector enzyme phosphodiesterase, which makes the cell less sensitive to light. This leads to the fact that information about the absolute brightness of the environment is lost. But the calcium-based mechanisms ensure the ability to register changes in light intensity, i.e. to see a shadow, for example. And what's more: without it, the visual system is no longer able to adapt to higher lighting levels. This is shown when the calcium ions are experimentally bound in the cell and are therefore no longer available for reactions.

Midnight. The sky is clear, the stars are twinkling. The best conditions for a short walk in nature, far away from the lights of the city. Quickly put on your shoes and out of the house through the garden into the forest. The air is fresh, the sounds a little strange. At first you can literally hardly see your hand in front of your eyes. But little by little we get used to the darkness. We see the narrow path more and more clearly in the weak starlight, see bushes and trees. And there, around the corner - wasn't a cat scurrying by?

Our eyes are masters of adaptation. In the glaring sunlight of a summer day, they provide a picture of the world as well as in the dead of night - albeit in different quality. Or to put it in numbers: very bright light is more than a trillion times more intense than the weakest light we can see. The adaptation to such a large range of different light intensities works so well because several mechanisms interlock.

The first adjustment screw is the pupil, the size of which changes depending on the lighting conditions. This regulates how much light actually reaches the retina. If it is bright, the pupil narrows reflexively in order to protect the retina from too much light. In the dark, it expands in order to optimally capture the few rays of light. But that alone does not explain the enormous adaptability of the sense of sight. Because the pupil area can only be enlarged by a maximum of 16 times, but the light intensity at night is, as I said, several powers of ten less than during the day.

Light and dark sides of the division of labor

To cover this huge range, there are two types of light-sensing cells, so-called photoreceptors, in the retina. The cones, which are also responsible for color vision, only work when there is strong incidence of light. That is why they take over daytime vision - also known as photopic vision. In late twilight or at night, the rods become active instead, and the eyes switch to so-called scotopic vision.

The background to this division of labor: rods are many times more sensitive to light than cones, but, unlike them, cannot detect different wavelengths and are therefore unsuitable for color vision. Because it is only through the specific irritability of the three types of cones for red, green or blue light and their interaction that a color landscape is created in our head. If only one type of photoreceptor is active, such as the rods in the dark, differences in the wavelength of the light cannot be imaged. This is called the principle of univariance. That is why all cats appear gray at night, no matter what color they are actually.

However, the transition from cone to rod vision does not take place from one moment to the next. At first the cones are still active. They react faster than the rods to a change in light intensity and they cover a larger range of light intensities overall, also because they are able to increase their sensitivity. That is why we can still distinguish colors to some extent on a clear night with a full moon. But if even the maximum sensitivity of the cones is not sufficient with increasing darkness, the light-sensitive rods take over the direction. But until they work optimally and give us the best possible night vision, it takes 20 to 25 minutes. The process by which our eyes get used to the night is called dark adaptation.

Both the rods and the cones contain photopigments, more precisely rhodopsin or the so-called cone ospins. Under the influence of light, these molecules break down into two parts, which triggers a cascade of reactions in the cell. At the end of this, the photoreceptor throttles the release of the messenger substance glutamate. Downstream cells of the retina convert this signal into nerve cell impulses and thus pass on the information “light” to the brain.

"Used" photopigment is continuously reassembled, but only in the amount that is needed under the currently prevailing lighting conditions. If it is light, the rods contain a lot of decayed rhodopsin. But if you go out of the glaring sunlight into a dark cinema, enough rhodopsin must first be regenerated to be able to cope with these lighting conditions. This takes about 20 to 25 minutes - the time that we experience has shown to need to get our eyes used to the darkness. With light adaptation, i.e. the return to light, the changes that make night vision possible are then reversed (see info box). It's faster, but it takes a few minutes until you can see perfectly again.

The change to the scotopic system of the rods has far-reaching effects. The most obvious is the previously mentioned inability to see colors in the dark. But anyone who has ever gone on a night hike knows that when it's dark, the view often looks a little grainy or blurry. This is due to the fact that only cones occur in the fovea centralis, the place of sharpest vision. The light-sensitive rods are mostly located in the periphery of the retina, where whole groups of them attach to just one bipolar cell, which then transmit the light information. These associations enable the retina to react more sensitively to small amounts of light. The other side of the coin: the wiring scheme is at the expense of image sharpness.

The ability of the eye to adapt to a large range of different lighting conditions therefore leads to compromises: during the day we see clearly and in color. The cones used for this are not very sensitive to light, but if it is bright enough, it does not affect visual perception. The rods that are active in the dark, on the other hand, are much more sensitive, but only allow us to recognize shades of gray. And their high sensitivity to light is at the expense of visual acuity. But taken together, the organs of vision with their ability to compromise almost always serve us well.