Charlottesville or Ithaca, whichever is safer

Diane L. Wolf is a sociologist at the University of California, Davis, and former director of the Jewish Studies program at Cornell University, Ithaca, New York. She recently worked for six months at the Center for Research on Antisemitism at the TU Berlin (ZfA) and researched the transmission of trauma from one generation to the next. Towards the end of her sabbatical year, she put together her thoughts on her time in Berlin in an essay.

When I met new people in Germany, there were frequent comments about my German last name. When I explained that my parents were born in Germany, I got a puzzled look, a non-verbal "Huh?" so to speak. 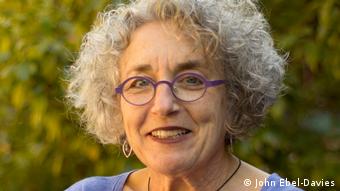 Diane L. Wolf, visiting researcher at the Center for Research on Antisemitism in Berlin

Nobody seemed to think of the 1930s or Hitler, which impressed me. I'm a middle-aged woman with curly hair - isn't that a clue? I would think something like that at this moment. But these are my usual thoughts anyway.

I used to tell people very clearly that my parents had to flee or they would have been killed. And while this information slumped with my counterpart and he rearranged everything, I could see his face, as he gradually understood. It shows the opposite of when a child who, when asked how much is two plus two, happily says "four!" calls.

The expression changed from smiling to very serious, and finally the question came, "Oh, so your parents were Jewish?" (I found it surprising that people used the past tense). "Yes, they were," I said. "And so am I. And I'm back!"

Sometimes her smile returned, but not always. I think some Germans still find it uncomfortable to meet a real, living Jew.

When I started coming to Germany on a regular basis - more than 30 years ago, after I met the German man who became my husband - I didn't have to explain my background in that straightforward way. Most of the people I spoke to were post-war and understood immediately. I find the different reactions of the two generations very understandable.

After six months in Berlin, I can say with full conviction that I feel very safe here - safer than in the USA. Basically, I think Germany is a good place for Jews these days. Yes, there is anti-Semitism here. Yes there are hate crimes. And yes, it is safe for Jews. It’s all true.

Events like those recently happened in Chemnitz are of course worrying. The anti-Semitism emanating from Germans who feel they belong to the right-wing populist Alternative für Deutschland (AfD) is fierce and nationalism is growing. But: The overwhelming reaction that followed the violent right-wing riots and gathered 65,000 counter-demonstrators was impressive and gives cause for hope.

From what I have read, there is no widespread anti-Semitism among fellow Muslim citizens and newcomers who have fled. My sociological instinct for contemporary German society tends to tell me that they suffer more from discrimination than Jews, but this is neither adequately reported nor recognized. 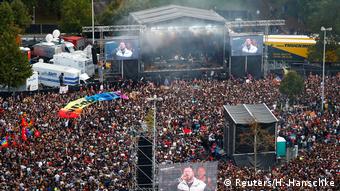 65,000 visitors came to Chemnitz for the concert against racism.

Neo-Nazis marched through the streets with torches in August 2017 in Charlottesville, Virginia. I was glad that my parents and grandparents were no longer alive and had to watch this spectacle. Imagine: To be happy that your parents and grandparents are dead! That's not normal! But there is no such thing as "normal" in the USA. To be afraid, that is the new "normal".

President Donald Trump did not directly condemn the march. He couldn't think of anything critical about the fact that neo-Nazis marched up with torches during the night. Only after some time and under pressure did he remark that there had been "a few very bad people in the group", but "also very good people on both sides". There you have it: It seems that Donald Trump knows some select neo-Nazis.

Germany tries to face its past instead of ducking away. I have the greatest respect for that. There are numerous memorials in Berlin, although I particularly like it when something is remembered more inconspicuously. One example of this are the remains of a Jewish orphanage near my apartment on Schönhauser Allee. The boards attached there, which you notice as you walk past, are moving reminders that briefly interrupt everyday life and make you think. They are also a sign of recognition.

This confrontation with the past could explain why some non-Jewish Germans are not sure how to react to me. For most of them, knowing what their country has done to my people and others is part of their education. While this may not be the education they received at home, their formal education has confronted them with unimaginable and horrific deeds committed on behalf of their families and their nation. 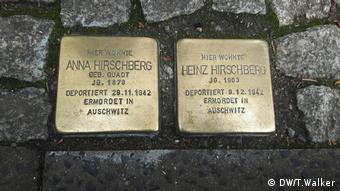 These small memorial plaques in the ground, so-called stumbling blocks, remind of the victims of the Holocaust all over Germany.

The reactions to my family background are completely different in other countries like the Netherlands. At more than 70 percent, the Netherlands had the highest deportation rate of Jews in Western Europe - directly after Germany. But many Dutch still see themselves as victims of the Nazis and not as supporters. If one of them finds out that I am Jewish, they are more likely to feel that we are on the same side - that of the victims of the Nazi occupation. They are less likely to feel uncomfortable that they come from a country where - contrary to the myth of resistance - some people were more than willing to cooperate with the Nazis.

What has become clear to me in the past few months is that the state has indeed created enormous awareness of what is happening in Germany. It is less clear how the German population absorbed this knowledge or accepted the past. In other words, there is a bigger discrepancy than I expected.

After all, the Third Reich is now far in the past. I don't think the younger generations should feel guilty for what their ancestors did to Jews, Sinti and Roma, gays, disabled people, Poles and resistance fighters. But they have to know and take it seriously.

Research has shown that the third post-war German generation appears to be writing a positive (and false) story about their grandfathers who served in the army or paramilitary wing of the Nazi party - or how they heroically saved some Jews. The past is revised in family memory in a way that does not reflect national memory or history.

While some may deplore the young Germans' lack of connection to the events of the Shoah, how many of my students in California feel bad about the incarceration of Japanese people in US internment camps during World War II? How many even know about it?

How many Americans own up to the way the US was created by genocide and built on the back of slaves? How many acknowledge that American Indians and African Americans are still an underclass who have received no apologies or reparations? Why are there no memorial stones on the west coast where people were killed in anti-Chinese riots?

A safe feeling in Berlin

I am not at home in German culture, even if I am familiar with some things because of my upbringing (rye bread, 4711 real cologne, writing and reciting poems for important celebrations and extreme punctuality!). I didn't make any German friends during my stay in Berlin. I understand this will take time, but I wish a little more had happened on this.

I really appreciated my colleagues from the Center for Research on Antisemitism (ZfA). From their reactions to what I said, I learned how difficult it is for Germans to criticize anything Jewish, including, and perhaps most importantly, Israel. At a conference in Cologne I got into a heated argument with a young German psychoanalyst whose unshakable defense of Israel amazed me

And unfortunately the Germans, including my husband, still can't laugh at my black Holocaust humor. I've made two new Israeli friends, both colleagues. We talk about being a Jew in Berlin and laugh about things that Germans don't dare to laugh about.

I hated the cold when we arrived in March. But still I felt as if I would like to be "at home" in our Berlin apartment. I loved my life in Berlin. I was so much more relaxed because I didn't have to worry about guns. Once I saw two Berlin drivers get out of their cars and yell at each other, but I kept reminding myself that no one was armed. I can't feel so reassured in my daily life or in my work at university in the United States.

When I saw memorials on the streets of Berlin, I felt recognized on a deeper level. I felt safe because I knew that most German politicians and people loudly condemn anti-Semitic attitudes, behaviors and actions.

I loved walking in the nearby Jewish cemetery and kept telling my husband that I wanted to be buried there. I really appreciated this time as I was able to focus on my research that was so appropriate to my surroundings, the novels I read and even what was shown on TV. I was completely lost in the 1930s and 1940s: life and work, family and memory mingled. 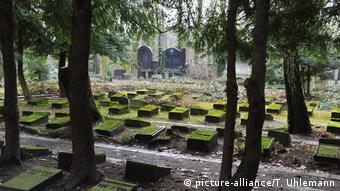 The Jewish cemetery in the Weißensee district of Berlin is one of the largest in Europe.

A future in Germany?

After living in Berlin for months and observing parents and children, adolescents and young adults and the elderly, I also realized that I was being robbed of this culture and some of its values ​​when my family had to flee. I didn't want to move to Germany when I married my husband, but now I feel like I withheld some kind of upbringing for our son in a society that is, in many ways, friendlier, fairer, and more family-friendly than that in the United States. And less violent.

My "inner refugee" has been on red alert (or should I say orange?) Since Trump was elected, and I'm very concerned about the future - partly for good reason, partly not. I am currently putting together the documents for the application for German citizenship, which in my opinion I need now more than ever. Whether and when I will submit it remains to be seen, but I am grateful for the opportunity. How ironic that citizenship that was stripped from my parents and grandparents now makes me feel safer in the world.