Is over speeding the main cause of accidents

The traffic accidents recorded by the police in Germany are summarized and processed by the Federal Statistical Office (Destatis). On the one hand, all traffic accidents are statistically recorded and recorded at regular intervals (e.g. monthly, annually). In addition, various other subdivisions and information are shown separately, such as those who have had an accident or fatalities, causes of accidents or locations of accidents. These more detailed evaluations support the further analysis of the accident occurrences and allow trends and possible problem cases to be identified more easily and to react accordingly.

The number of accidents in Germany has risen steadily in recent years and reached a new high of around 2.69 million traffic accidents in 2019, which corresponds to a slight increase of almost 2% compared to the previous year, because the number of traffic accidents was in 2018 at 2.64 million. By contrast, significantly fewer traffic accidents were counted in 2008, namely 2.28 million. For years, the police have been complaining about increasingly aggressive driving behavior by drivers, as well as strong distraction from using smartphones at the wheel - two main reasons for the frequency of accidents. 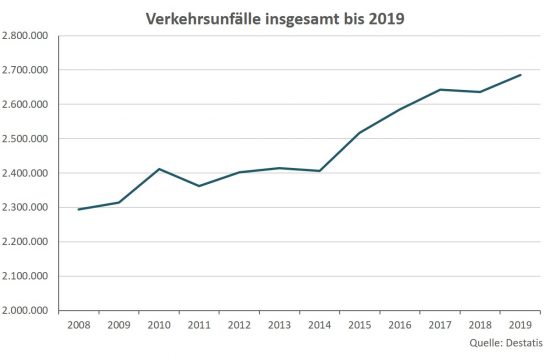 Fortunately, the majority of traffic accidents remain with property damage, i.e. there are no personal injuries or accidents. Here it is worthwhile to take a closer look at the definition of accidents: All lightly and seriously injured persons as well as road users killed are counted as casualties. Seriously injured is anyone who has to spend more than 24 hours in hospital in inpatient treatment after an accident, regardless of whether it is only two days or several months. Those who die within 30 days of the consequences of an accident are counted as killed in the statistics.

The number of casualties in the last few years up to 2018 was mostly around 400,000 people annually. In 2019, the number fell to 387,276 casualties. In relation to the year 2006 with 427,000 casualties, this is a significant decrease. Even if the accident curve has been pointing downwards since 2006, the decline has slowed significantly and the numbers have stagnated at a high level of around 390,000, especially since 2009.

The causes of accidents are divided into four main subject areas in the statistics.

Incorrect driving behavior is to be understood as driver-related causes, i.e. the starting point is always neglect or lack of attention on the part of the motorist / vehicle driver. This can be, for example, driving under the influence of alcohol, too high (not adapted) speed, too little distance, errors when turning or turning, not observing the right of way or other misconduct such as errors when overtaking or improper road use.

The general causes of accidents include, for example, difficult road conditions and weather conditions such as rain, snow or black ice, but also obstacles or animals on the road such as deer crossing. 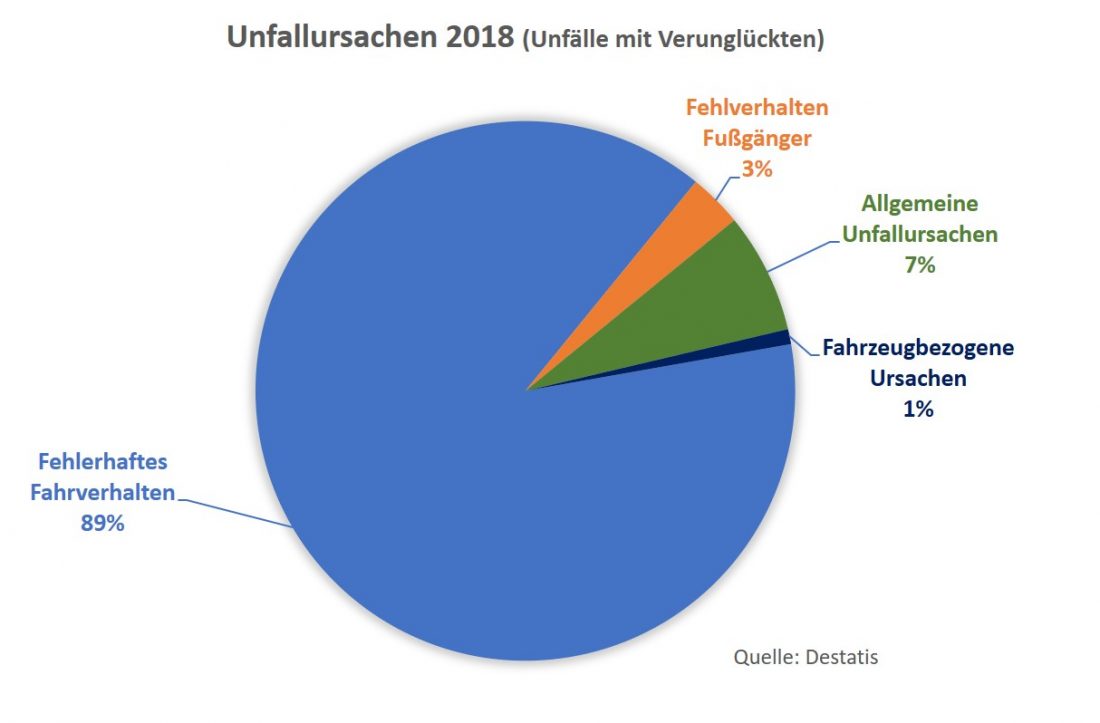 Vehicle-related causes are technical defects in the vehicle, often inadequate maintenance, e.g. in the lighting, the brakes or the tires. The deficit in the vehicle then creates a dangerous and accident-prone situation.

The “pedestrian misconduct” category summarizes all accidents that can be traced back to incorrect actions by road users who are on foot. In most cases, it is pedestrians crossing the lane, whether it is simply entering the lane without paying attention to the traffic, or e.g. crossing the street when the pedestrian lights are red.

In 2018, the main cause of accidents was incorrect driving behavior with 89%, followed by general causes of accidents with 7%, in 3% the cause was the incorrect behavior of pedestrians and in 1% it had a vehicle-related cause. Even if the percentages vary slightly, the wrongdoing of drivers has been by far the leading cause of accidents for several decades. 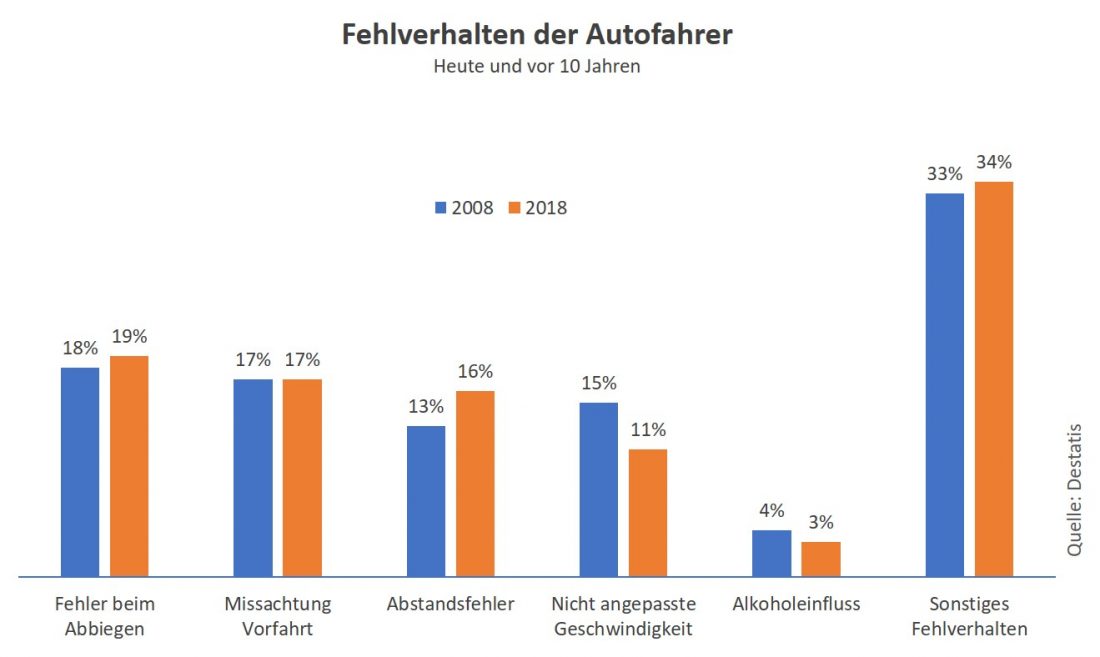 If one compares the data from 2018 with those from 2008 for the main cause of the accident, “driver misconduct”, some changes can be seen. The causes of “drink-driving” and “excessive speed” (previously the second most common cause) are on the decline. This is certainly also due to the increased controls in these areas. The “other misconduct” also includes the use of mobile phones while driving, which has led to the fact that the numbers in this area have increased in recent years.

Another important differentiation in the accident statistics is made with regard to the "casualties by accident location". Which roads and traffic areas are most dangerous and where do most accidents occur? 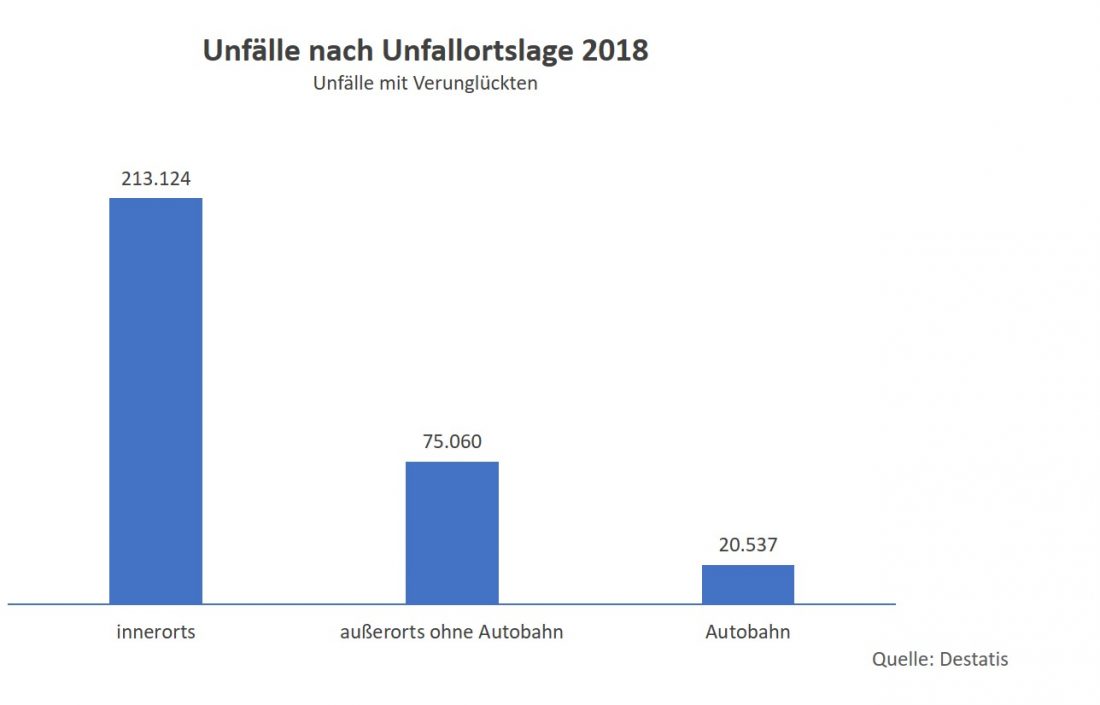 Of the 308,721 accidents with casualties every year, around 69% occur in urban areas, i.e. within the local limit signs. Around 24% of accidents with casualties happen on country roads or district roads (out of town without Autobahn) and only a relatively small proportion of 7% is registered on motorways. Given the density of traffic in cities, these statistics seem less surprising. The situation is different for accidents with road deaths:

Most of the accidents with personal injury occurred in urban areas in 2018, but most of the traffic fatalities (1,867) occurred outside urban areas on district and country roads (excluding the autobahn). The speeds are higher outside of built-up areas, which means that accidents on country roads, e.g. when turning (colliding with oncoming traffic) or hitting a tree on an avenue, are often more severe. 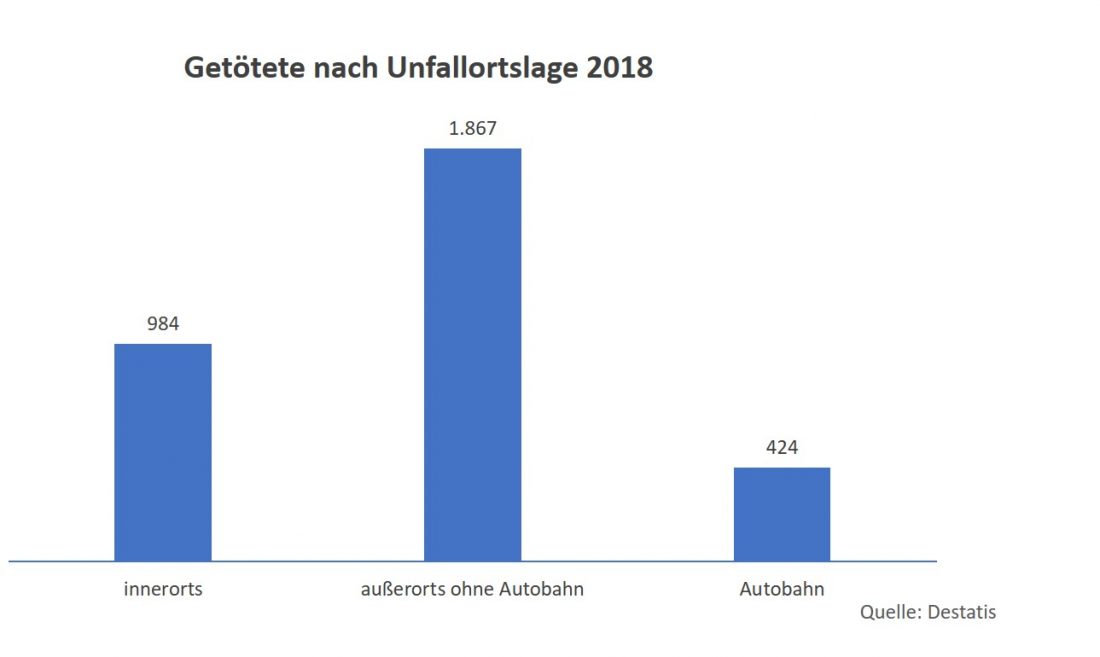 984 people died in urban areas, around half as many as on country roads / district roads. Despite the higher speed level on motorways, accidents there are usually less severe. 414 people died on motorways in 2018. The safety standard on motorways, including guard rails and other measures, is quite high, so that accidents are less likely to be fatal.