What is the height of the Nepalese hypocrisy

The Summit and Beyond

The DMFF program 2020 deals with the topic “The Summit and Beyond”. We hereby raise the question of whether life is really about working towards an obvious climax. Is ticking off a bucket list or taking the perfect Instagram photo why we face challenges? And are the mountaineers and climbing heroes we look up to still heroes if they don't make it to the top? Aren't we all too fixated on the highest, the best, the most expensive, and don't we forget the small, the close, the valuable? Aren't we striving too hard for the almost unattainable and missing out on happiness in the process?

Are we striving too much for the peak of happiness?

We learned this very clearly this year that we can make an infinite number of plans, but never have everything under control. Climate change and especially the COVID-19 crisis are forcing us to adjust our goals and ambitions. The glaciers are retreating and the winters are less snow reliable. The frost line rises higher and higher and makes entire climbing routes and paths impassable. Animal and plant species literally disappear like snow in the sun. If the summit was our goal, the question is whether we can still reach it now.

Nature has always been the scene of our actions, and conversely, our actions have influenced nature. Now that we are increasingly dependent on technology and permanently digitally connected, we are looking more than ever for detachment and variety in nature, preferably far from the beaten path. We long for adventure, superhuman achievements and conquests of the unknown beyond the safe limits of our everyday lives. We have a romantic longing for “untouched” nature, but our relationship with nature has changed.

How can we explain this obvious hypocrisy? What is the summit worth when, like last year, we see pictures of hundreds, sometimes inexperienced and often spoiled, tourists on their way to the highest mountain in the world? In order to snap this “unique” Instagram photo, they accept dangers for their own lives, but above all for other people's lives. 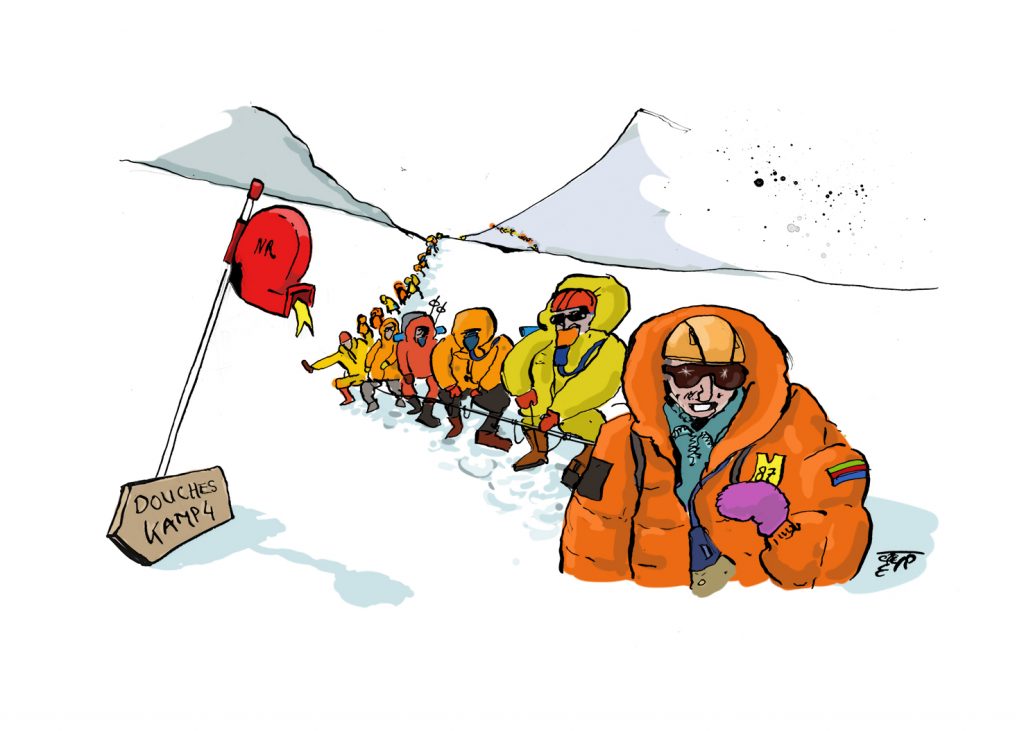 Should the summit be the goal?

The Himalayan Database, the prestigious institute founded by the late Elizabeth Hawley, records the ascents of the Nepalese peaks. From this database and also from Eberhard Jugalski's research on 8000ers.com it is clear that many alleged summit successes are questionable to say the least. For the Manaslu, a relatively easy 8000er, but with a long, tricky and dangerous summit ridge, an inventory in 2016 shows that only 15 of the alleged 175 summit successes actually concerned the really highest point. The remaining climbs ended at the top of the fixed ropes on the upper ridge.

The question is what is a real top? Some climbers speak of the "tolerance zone" within which a summit can be claimed. For professional mountaineers and commercial travel guides, interests are high and failed summits literally thwart the bill. So they keep quiet, turn a blind eye or make false statements.

In the past, mountain peaks were conquered for prince and fatherland, for science for the romantic ideal of being the first to stand on the seat of the mountain.
Today one searches almost in vain for a virgin summit and reduces the ascent to a sporting achievement on a checklist. Technology and digital media have minimized the risks of such tours and brought the most distant and highest mountain peaks within reach. The summit has become a commercial product, a tourist destination.

How can we find our place in nature again? If it's not at the top, where is it? Perhaps much closer to home, on the unnamed hills, by the chance encounters, the rainbow and the mud puddle. Perhaps when we realize that we ourselves are part of nature and thus influence the consequences of climate change and the pandemics. Let's aim not up, but beyond: The Summit and Beyond.

DMFF organizes various events and meetings throughout the year. Do you want to be informed? Subscribe to the newsletter and don't miss a thing!

Stay up to date on our social media channels