The carbohydrates come from plant juices, which are usually obtained indirectly via plant sap suckers (such as plant lice) but also directly from the plant. When the plant sap is absorbed indirectly, the workers collect the droppings from the plant teats (the so-called honeydew). For this purpose, the plant teats are "milked" by the ants, which means that the ants stimulate their "cows" by stroking their feelers (the so-called "drilling") to give off a drop of the coveted food from their abdomen.

Harvest ants (e.g. Messor, Pogonomyrmex) collect grains on a large scale and store them in granaries. In chewing groups, the grains are cracked, salivated and made into ant bread.

The proteins are obtained to a large extent from arthropods of all kinds, some of which are freshly hunted and some are already dead. Many species are excellent hunters and can cope with animals many times larger than the ants themselves. This fact is one reason that ants (with a few exceptions) are not "pests", as is commonly believed: One Colony of the "hill-building wood ants" (Formica s. Str.), for example, can prey on several million insects in one day, including many harmful insects, thus contributing to the health of the forest.
The so-called driver ants (South America, Africa) are highly valued by the local inhabitants, since after a raid of these species there are hardly any unpleasant animals such as spiders, scorpions and small snakes to be found in the area. In addition, they bring the farmers in these countries a rich harvest, as masses of harmful insects are also captured. But the other ant species also contribute to "natural hygiene" in this way.

The food is usually collected in the area and distributed very quickly. When an ant is touched by the antennae, it chokes out existing food from its crop (also called social stomach), which the contacting ant eats. In this way, a source of food can be distributed to all individuals of a tribe in less than half an hour. Due to the good distribution of the food, the foraging ant can trust that the others have the same nutritional requirements as it and are specifically looking for it.

An ant that finds food moves back into the burrow as quickly as possible after eating. All ants that it meets on the way there are cared for as described above and follow the scent trail to the food. However, this behavior is not found in all species.

Many ants eat "carrion", but not when it already stinks. They behave just like us: what we get from the butcher is carrion. Fresh, or z. B. air-dried, we like it. If it is bogus, we spurn it. Scavenging ants utilize freshly dead insects or go to a fresh carcass of a small mammal or bird. In dry areas, dead insects have also been used for a long time, e.g. B. from Cataglyphisbringing in dried-up insects in the semi-desert heat.

In my more than 40 years of experience with ants, I have always made sure that the remains of meal beetle pupae or pieces of cockroach that we feed were ALWAYS cleared after 3 days at the latest (my candidates and vets had to change feed on Mondays, Wednesdays, Fridays). Depending on the moisture requirements of the ant species, the feeding arena was sometimes more, sometimes less moist. Dried out food is not accepted by all species. Moist meat feed starts to stink after 2 days, and sometimes mold grows on it. And it stinks badly to us too. You can watch ants go there and turn away "disgusted"! It is also important that you never offer too much meat feed, but only as much as is likely to be consumed in the next 48 hours. Then the surface on which the bacterial growth begins is evenly eaten away so that the food actually lasts longer.

They disdain spoiled food (they are "more sensible" than you might think: they don't eat the stuff and therefore don't spoil their stomachs!). In case of doubt, they starve, or because they do not give the larvae any spoiled food, the larvae starve to death. It is not uncommon for them to be fed to their sibling larvae shortly before they die.

worms are less popular with ants because they are often slimy. However, the photo shown on the right shows Lasius niger when processing a (half) dead earthworm in the field (terrace). May 1st, 15 degrees cool, hardly any aphids and other insects. The small worm (perhaps pulled out of the ground by a bird) is covered in dirt that neutralizes the slime, and it looks slightly dried out. So an earthworm can also serve as prey.

Some species developed special symbiotic relationships with their food sources that are otherwise not found in nature:

Several species keep plant lice similar to livestock. They protect the aphids, carry them to suitable forage plants and some species bring mother animals and eggs into their nests at the beginning of their winter dormancy. The ants receive honeydew from the plant lice, and in some cases the lice also serve as a source of protein.

The genus offers an example of keeping root lice in the nest, on plant roots Tetramorium. Here you can often find conspicuous plant lice directly in the nest. The following picture shows Tetramorium-Workers, probably with the kind Paracletus cimiciformis: Two genera of ants (Atta and Acromyrmex) have developed a particularly remarkable way of obtaining food. These belong to the tribe of the "Attini" (leaf cutters). They occur exclusively in the tropical regions of South and Central America. These ants cut green foliage from the trees and carry these pieces of leaf into their nests.

However, they do not eat the entered leaves, but use them to grow a fungus that they feed on. However, the adult ants get a large part of their (carbohydrate) food from the plant sap that escapes during cutting and small chewing, which is of course sugary. This symbiosis is so advanced that the leaf cutter mushroom could not exist without its ants and vice versa.

Other genera of the Attini also grow mushrooms, but do not use fresh plant material as a substrate. B. caterpillar droppings (= more or less pre-digested, already crushed plant material).

Many plants, also in the Central European flora, but also outside of the flowering period, produce nectar in extra-floral nectaries. These are glands that are attached to different parts of the plant outside of the flowers ("extrafloral"). The sweet secretions are sought out by ants. While walking around the plant, they also encounter predators of the plant, or z. B. their eggs, and rid the plant of their pests. 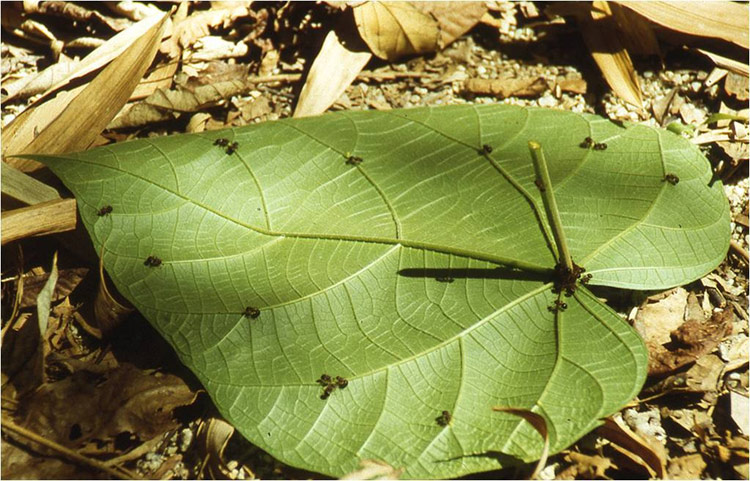 Leaf of an unnamed plant with indeterminate ants that accumulate on the leaf vein branches where the extra-floral nectaries are located. Malaysia, near Kuala Lumpur. The sheet and the ants were cut off and placed on the floor for the photo. Unfortunately, it was not possible to take a photo upwards, against the light. Some ants had fled while they were losing weight, so there were even more of them at the nectaries.

Unusual ways of getting food