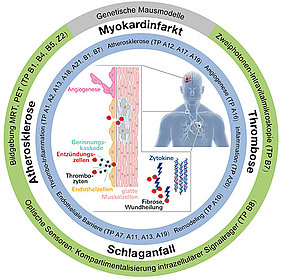 The Collaborative Research Center SFB 688 looks back on twelve successful years of research in the field of cardiovascular diseases. Current and former members of the SFB 688 as well as top-class speakers from home and abroad spoke about their, in some cases, groundbreaking results. While cardiovascular research highlights from all over the world were exchanged at the Rudolf Virchow Center, the focus at the German Center for Heart Failure (DZHI) was on practical consequences for medicine. The researchers at the DZHI, together with cooperation partners, provide a comprehensive insight into the current state of understanding and care of heart failure and its complications and concomitant diseases.

Bernhard Nieswandt, spokesman for the SFB 688, sums it up: “In the last twelve years we have contributed to decisive findings about the development of common diseases such as heart failure and stroke. That was only possible because scientists from medicine, biology, chemistry and physics have successfully worked together beyond their specialist boundaries. Thanks to the close networking with leading research locations at home and abroad, our SFB gives Würzburg cardiovascular research worldwide visibility and offers young colleagues excellent career prospects. Numerous former scientists of the SFB 688 now hold management positions at universities and other research institutions in Germany and abroad. On the basis of these successes, we want to develop a concept for a new research network in the next few months that will address current issues in the field of cardiovascular diseases. "

Stefan Frantz, Head of the Medical Clinic and Polyclinic I at the University Hospital Würzburg, adds: “We have succeeded in better understanding why a heart develops cardiac insufficiency. For example, we looked at the role of inflammation after a heart attack. It sounds like heart attack and inflammation have nothing to do with each other. But everyone knows that the healing of wounds, such as those on the skin, also leads to inflammation. After a heart attack, a wound in the heart also heals. We learned that inflammation is crucial for healing. The control of the inflammation is very complex. Incorrect control can contribute to a worsening of the disease process. Our goal is to optimize this process again by administering medication. For clinical use, however, we have to learn to understand the regulation of inflammation in heart muscle weakness even better. "

Stefan Frantz leads the first session of the Joint Symposium together with Martin Lohse. Martin Lohse was until recently professor at the University of Würzburg and in the SFB 688 and DZHI until he became chairman of the board and scientific director of the Max Delbrück Center for Molecular Medicine in the Helmholtz Association (MDC) in Berlin-Buch.

SFB as a stepping stone to academic positions

Georg Ertl, one of the founding spokespersons of the SFB and DZHI, today Medical Director of the University Hospital Würzburg, says that the SFB not only has an extremely positive effect on the research and research structures of the location - that is how he and his predecessor, the SFB 365 Pathophysiology, were Heart failure played a decisive role in the founding of the DZHI - but also in the further training and career opportunities of the next generation of scientists. Numerous academic careers have sprung from the SFB 688, which investigates the mechanisms and imaging of cell-cell interactions in the cardiovascular system. An example of the opportunities for development within the SFB is David Stegner, a doctor of natural sciences. The 36-year-old has been working at the Rudolf Virchow Center since 2011, initially as a postdoc and now as the scientific secretary of the SFB 688 and group leader. “Collaborative research like the one in the SFB 688 offers many opportunities, especially for young scientists,” comments David Stegner. “In addition to the structured doctoral training and the good infrastructure, the scientific exchange with other specialist and subject areas is a decisive plus point. So you can think outside the box, which is a good basis for later interdisciplinary cooperation. Because without this networking, today's research is hardly imaginable. ”After completing his doctoral thesis, David Stegner first received further scientific qualifications in a SFB stroke project under the leadership of a clinical neurologist and a basic scientist and then became a sub-project manager. His current project is also set up on an interdisciplinary basis. Together with the biophysicist Katrin Heinze and the neurologist Guido Stoll, he is in charge of the project.

Multidisciplinarity and national networking are important quality indicators in clinical cardiovascular research. Heart failure, for example, has various causes and effects. It goes hand in hand with numerous concomitant and secondary illnesses. An outstanding example of successful multidisciplinary research and networking inside and outside the Würzburg University Hospital is the MOOD-HF study, to which 16 cardiological and psychiatric / psychosomatic departments from clinics all over Germany contributed. Christiane Angermann, cardiologist and head of the study with the psychiatrist Jürgen Deckert: “Depression is one of the most common diseases accompanying heart failure. In the context of the MOOD-HF study, it was found that, in heart failure patients, optimized heart failure therapy and multidisciplinary care served to cope with the accompanying depression, whereas the administration of a common antidepressant of the so-called selective serotonin reuptake inhibitor type proved to be ineffective and particularly severe in patients cardiac patients even proved to be potentially harmful. "

"The optimal implementation of the research results obtained from clinical studies has become very complex and practically only possible in a network," adds Stefan Störk, head of the Department of Clinical Research and Epidemiology at the DZHI. - "However, if the network of care providers succeeds, this results in strong and lasting effects that benefit everyone involved." The new findings and possibilities for the care of heart failure patients will be discussed on the third and last day of the Joint Symposium. The organizers have invited cardiologists, internists and general practitioners to the DZHI. The DZHI, which was founded in 2010 as an integrated research and treatment center, is a beacon and a symbol of interdisciplinary cooperation.

In the not so distant future, patients can hope for some active ingredients, the basics of which were researched in the SFB 688: Revacept, for example, an inhibitor of the collagen receptor glycoprotein VI (GPVI) on platelets is already in clinical test phase II. That means it has already been successfully tested in a controlled study on humans and is now being investigated further in a larger patient study. Previously, efficiency studies in the SFB 688 demonstrated that the blockade of GPVI clearly prevents the formation of blood clots in the arteries. It binds the platelets to arterial lesions, vascular injuries, like a plaster. This is of crucial importance for the course and complications of atherosclerosis, which can lead to acute coronary syndromes. Heart attacks and strokes can thus be prevented.

Another drug is about to enter clinical trials and could save thousands of patients with arrhythmias. To avoid clots and thus prevent a possible stroke, heart attack or pulmonary embolism, they depend on blood thinners. However, these blood thinners should not interfere with hemostasis too much. The researchers in the SFB 688 in cooperation with a pharmaceutical company discovered a completely natural anticoagulant in a small black insect from South America. When the predatory bug Triatoma infestans sucks blood from its host, it does not clot. A protein in the bug's intestine ensures perfect blood flow. This protein has been further developed so that inhibitors against coagulation factor XII can soon be tested in clinical studies. 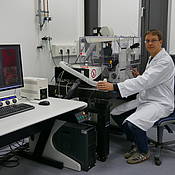