Diffuse radiation, i.e. the proportion of solar radiation that is scattered by the air molecules in the atmosphere, can only be determined empirically. For a simpler practical application, these radiation components are included in the calculation values ​​of DIN 4710 and are not shown separately.

The heat gains from solar radiation are carried into a building through the transparent surfaces. In addition to the orientation of these areas to the sun, the influence of the year and time of day of the sun, the size of the window area and, above all, the structural / physical structure of the window. The figure shows the radiation balance of a window as an example.

The energy gain of a window is characterized by the energy transmittance, the so-called g-value. In addition to this value, which characterizes a specific construction, the so-called shading factor z-value (also called: Fs), which describes the weakening of the solar radiation entering the building, must be taken into account for the specific individual case. The calculated values ​​for this factor depending on the various types of shading are described in VDI 2078. 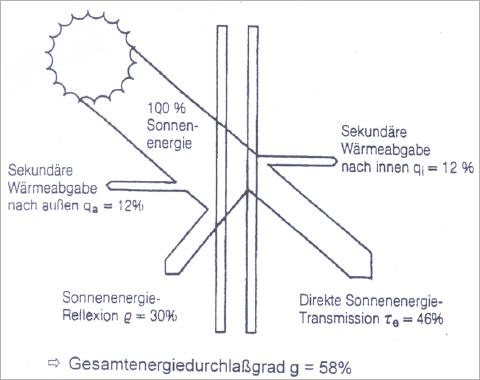 Radiation balance of a window