The only real cheesecake - New York or American?

Nobody bakes as well as grandma - Black Forest cake, apple crumble and - of course - cheesecake. The bottom: a classic shortcrust pastry. The filling: a fluffy quark cream. Those who like it more pompous can bake a cheese and cream cake or a tear cake (cheesecake with a meringue topping). How to make your cheesecake perfect? Our great cheesecake guide brings together all of grandma's secrets.

No quark, no shortcrust pastry. Instead, plenty of cream cheese, a sponge cake or biscuit base. Depending on the region, the cream cheese is (partially) replaced by cream, sour cream or cottage cheese. Important: A real cheesecake is baked in a water bath, a German cheesecake is not. 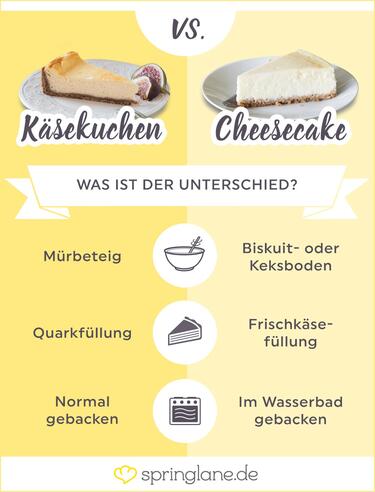 An airy, light sponge cake base - that's how the original likes it best. Very thin and hardly noticeable. The focus here is on the cheesecake filling. In contrast to the German biscuit, the American biscuit has butter in the batter. Beat eggs separately from each other. Mix the egg yolks with the butter and flour and fold in the egg whites. Important: The base is pre-baked for about 10 minutes. 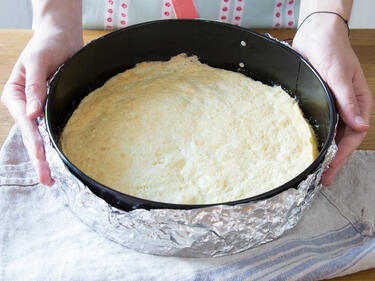 The basis of the New York Cheesecake: a light and airy sponge cake base.

If you want cheesecake, then the original from New York - of course. What makes the classic cheesecake so special? Its creaminess. Quote from my colleague Céline: “That is the final stage of creaminess.” This is due to the combination of cream cheese and cream. The cream cheese gives the cheesecake mixture its creaminess, the cream loosens the whole thing up a little. Doesn't lie heavy in the stomach and leaves space for a second piece.

This is not a biscuit, but a biscuit base. Grind whole wheat butter biscuits into fine crumbs and mix with butter. For that certain something, add a good pinch of sea salt to the dough. An American cheesecake can taste like salt. In America, graham crackers, wholemeal butter biscuits, are classically used. I like the hearty Hobbits biscuits from Brandt best. 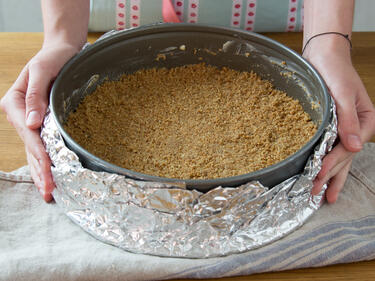 The basis of the American cheesecake: a crumbly biscuit base.

Sour cream instead of whipped cream. 3 eggs instead of 2. The American cheesecake is firmer, more compact and overall a bit more substantial. So all in all, it is less creamy. The conclusion of my test eaters: "I can't manage a second piece of this". "Now I've saved my lunch".

Baked in a water bath

Unlike the German cheesecake, the American cheesecake - whether New York or American - is baked in a water bath. Why? Because it is so particularly creamy. A positive side effect: the surface should remain intact and not get any unsightly cracks. Is it true?

That's how it's done 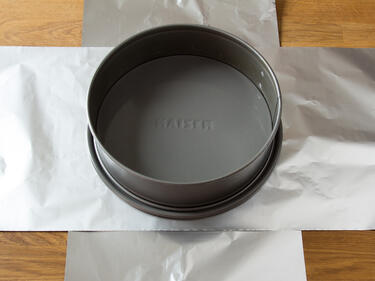 Take the aluminum foil up on the outer wall of the springform pan and fold it over, press down. 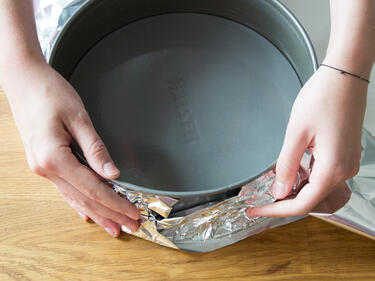 Fill a drip pan or a deep baking sheet with water and put in the springform pan. 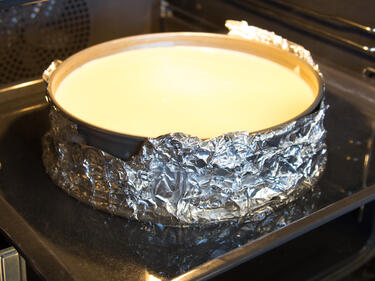 The test result was clear. 12 out of 12 cake eaters chose the cheesecake that was not baked in the water closet in 3rd place. The verdict: the base too dry, the filling too stale - almost a little bit pitted. Not in the way you know the American classic. For me this means: I will continue to bake my cheesecake in a water bath. The result speaks for itself. As for the shape, I'm - admittedly - disappointed. It is said that if you bake your cheesecake in a water bath, you can look forward to a smooth surface in the end. That's not entirely true. Even though I baked both cheesecakes in a double boiler, the New York cheesecake cracked - and quite a bit. Strangely enough, the American cheesecake remained whole. Was I just unlucky on my first try? I dont know. The cracks in the cheesecake didn't bother me. I like it when the homemade cakes look like grandma's. And that didn't hurt the cake in terms of taste. A little tip: after 45-60 minutes, cover with aluminum foil. This way the cheesecake stays nice and light and doesn't take on any color.

9 tips for the perfect cheesecake

Traditions have to be preserved. I don't like it when my grandma suddenly bakes her crumble cake with a quark-oil batter instead of the classic yeast batter. Or when she fills her Black Forest cake with a quark mixture. Here I am ... well, conservative. And I like to be.

So it is all the more surprising that I suddenly forgot any sense of tradition when I saw the American classic. I like the American Cheesecake's cookie crust and I love the New York classic's filling. Translated means: I now have a New York Cheesecake with an American biscuit base - an American Cheesecake from New York, so to speak. A creamy rendezvous that goes perfectly with the moist biscuit base. I've found my new favorite cake. And my colleagues too - I'm sure of that.

Say cheese! 5 ideas to be happy

Do you like strawberries? Do you love chocolate? Are you a fan of oreo cookies and peanut bars? Then let your creativity run free and look forward to double - oh what - triple cheesecake luck.