How is DNA preserved in mummies?

A look into the mummy genome: For the first time, researchers have succeeded in deciphering the complete genetic make-up of Egyptian mummies. The DNA, which is up to 3,400 years old, provides exciting insights into Egyptian history: Although Egypt was occupied several times by foreign peoples, this left hardly any genetic traces. Also surprising: Modern Egyptians differ genetically significantly from their ancestors, as the researchers report in the journal "Nature Communications".

Mummies provide exciting insights into life in ancient Egypt. They reveal, for example, that some of the elites of the time suffered from hardening of the arteries at a young age and did not otherwise live very healthily. In addition, mummy examinations have already helped to clear up historical murder cases and obscure family relationships.

Too hot, too humid and way too damaged?

However, to decipher the genome of the Egyptian mummies reliably and completely was previously considered almost impossible: “The hot Egyptian climate, the high humidity in many graves and some of the chemicals used in mummification contribute to DNA degradation and therefore ensure long-term preservation of the genome of Egyptian mummies is unlikely, ”explains senior author Johannes Krause from the Max Planck Institute for the History of Man in Jena.

Nevertheless, Krause and his team have started a new attempt at DNA sequencing - with success. For their study, the researchers analyzed DNA samples from 151 mummies buried between 1388 before and 426 after Christ in Abusir el-Meleq in central Egypt. They come partly from the New Kingdom, the time of the Ptolemies and also from the era of the Roman occupation.

Breakthrough thanks to the latest technology

Thanks to the latest technology, the researchers were able to obtain and analyze the mitochondrial DNA of 90 of the 151 mummies. This part of the genetic material that is not located in the cell nucleus provides valuable information about maternal ancestry. The scientists were also able to sequence the entire genetic material of three male mummies for the first time - an important breakthrough in researching ancient DNA. 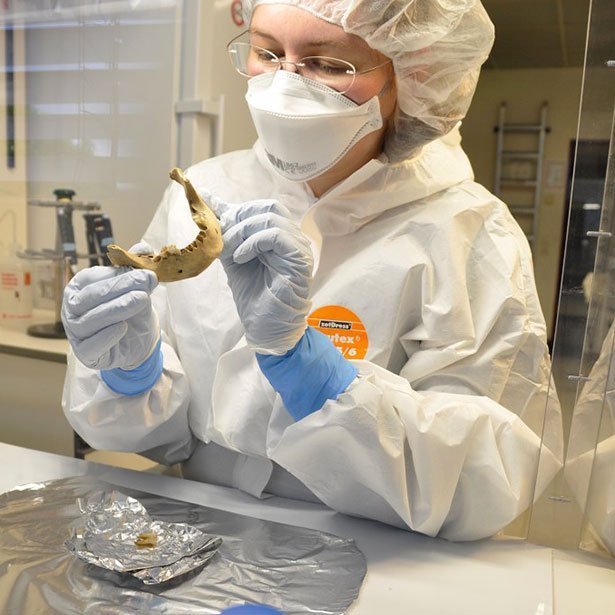 DNA sampling in the paleogenetic laboratory of the University of Tübingen. © Johannes Krause

"We can thus refute previous fears that climate and mummification per se prevent the preservation of DNA in Egyptian mummies," the researchers state. With the help of modern sequencing technologies, the genome of mummies now provides valuable insights into the history of ancient Egypt on a genetic level as well.

In fact, the mummies that have now been examined are already delivering exciting new insights. Because they come from a time in which Egypt was repeatedly dominated, occupied or ruled by foreign peoples - among others by Assyrians, Persians, Greeks and Romans. "We wanted to test whether the conquest by Alexander the Great and other foreign powers left a genetic mark in the genetic make-up of the ancient Egyptian population," explains Verena Schünemann from the University of Tübingen.

The surprising result: “The genetics of the inhabitants of Abusir el-Meleq have hardly undergone any major changes during the period of 1300 years we examined,” reports co-author Wolfgang Haak from the Max Planck Institute for the History of Man. "This suggests that the population has hardly been genetically influenced by foreign conquest and rule."

And the DNA analysis revealed another surprise: Today's Egyptians differ genetically significantly from their famous ancestors. While these were closely related to the inhabitants of the Levant, Anatolia and the rest of the Mediterranean, this only applies to a limited extent to their descendants. Because modern Egyptians carry up to 20 percent of the genetic makeup of black African populations, as the researchers report.

"This indicates that there has been an increase in the flow of genes from sub-Saharan Africa to Egypt over the past 1500 years," says Haak's colleague Steffen Schiffels. Possible reasons for this could have been increased immigration of people from the regions upstream of the Nile, but also increased long-distance trade between southern Africa and Egypt, the researchers speculate.

The slave trade, which began around 1,300 years ago, may also have contributed to this gene flow. In its course, an estimated six to seven million slaves were abducted from sub-Saharan Africa to North Africa, the scientists report. (Nature, 2017; doi: 10.1038 / ncomms15694)