India Economy - Powerful, but poverty is an ongoing problem

The latest forecast by the International Monetary Fund (IMF) sees India as one of the fastest growing economies in the world - even if the Covid-19 pandemic is taking its toll. The IMF expects the India economy to grow by 1.9% in 2020. However, this is the slowest rate of expansion since 1991.

Still, investors should keep an eye on the growth of the Indian economy.

India is a fast-paced and highly complex nation that went through profound changes in the post-World War II era. After India gained independence after its colonial past, the country quickly industrialized and is now characterized as a developing market economy.

In terms of nominal GDP (USD 2.94 trillion), India is the fifth largest economy in the world. Measured in terms of purchasing power parity with 11.33 trillion. USD, the Indian economy even climbed to third place.

And the India economy continues to grow - even in times of the Covid-19 pandemic. The IMF expects the Indian economy to grow by 1.9% in 2020. The only other economy that will see growth this year according to the IMF is China. 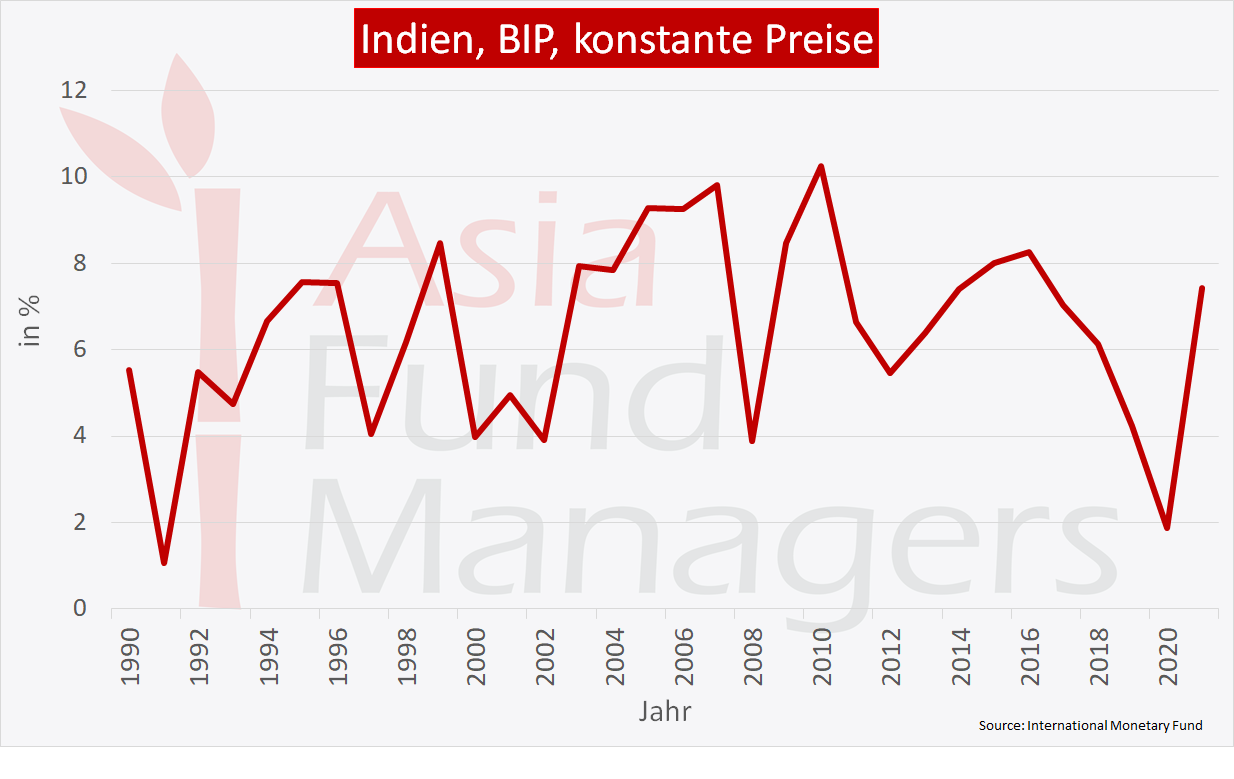 However, despite India's rapid industrialization, there is no doubt that poverty remains a major problem in this country. India's GDP per capita is just $ 2,170, with the country ranking 139th in the world in this category. The level of poverty continues to determine daily life in India, as 73 million people in the country live in extreme poverty and many others continue to experience a very simple standard of living. 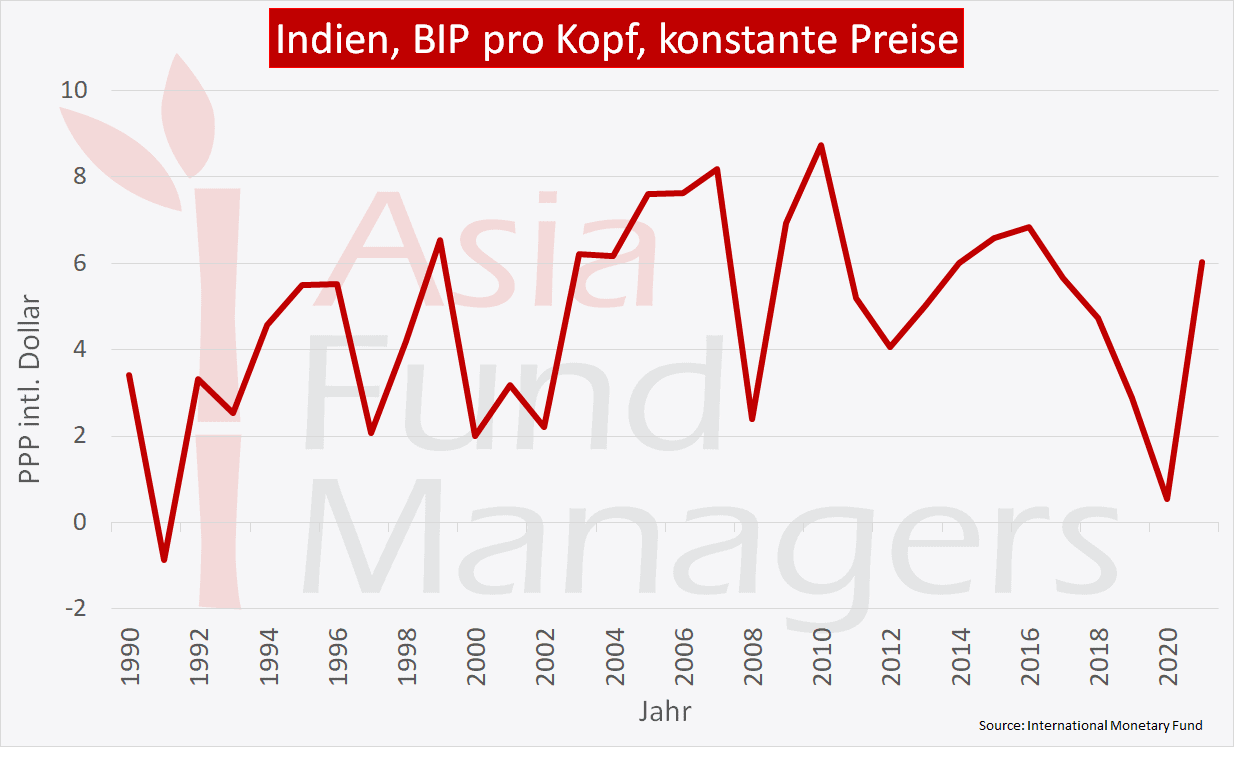 Demographically, over 50% of India's population is under 25 years old and over 65% is under 35 years old. This means that the average age in the country is just 29 years. This very young population will be able to help the country with its demographic development. By comparison, the median age in China is 37 years and in Japan a worrying 48 years.

Much of India's economic development has been achieved thanks to its huge population, with currently 1.34 billion people in the country. Only China has a larger population than India. However, the United Nations assumes that India will replace China by 2024.

While unemployment is relatively low at 7.3%, the distribution of income and wealth in India is extremely poor. There are huge differences across the country in terms of social factors, some of which are catalyzed by the caste system that to many Western observers seems out of date and morally questionable. Thus, the richest 1% of Indians own 58.4% of the wealth and the richest 10% of Indians own 81% of the country's wealth.

The Indian Central Bank is based in Mumbai, by far the most important metropolitan area in the country. The central bank was recapitalized in 2009 along with 17 other public sector banks. The Central Bank of India was founded by Sir Sorabji Pochkhanawala on December 21, 1911 and nationalized by the Indian government in 1969.

Monetary policy in India is particularly focused on achieving price stability, which is crucial in a country where poverty is such a persistent problem. Inflation has risen sharply in the country recently, prompting the central bank to put rate cuts on hold despite continued economic growth in India. 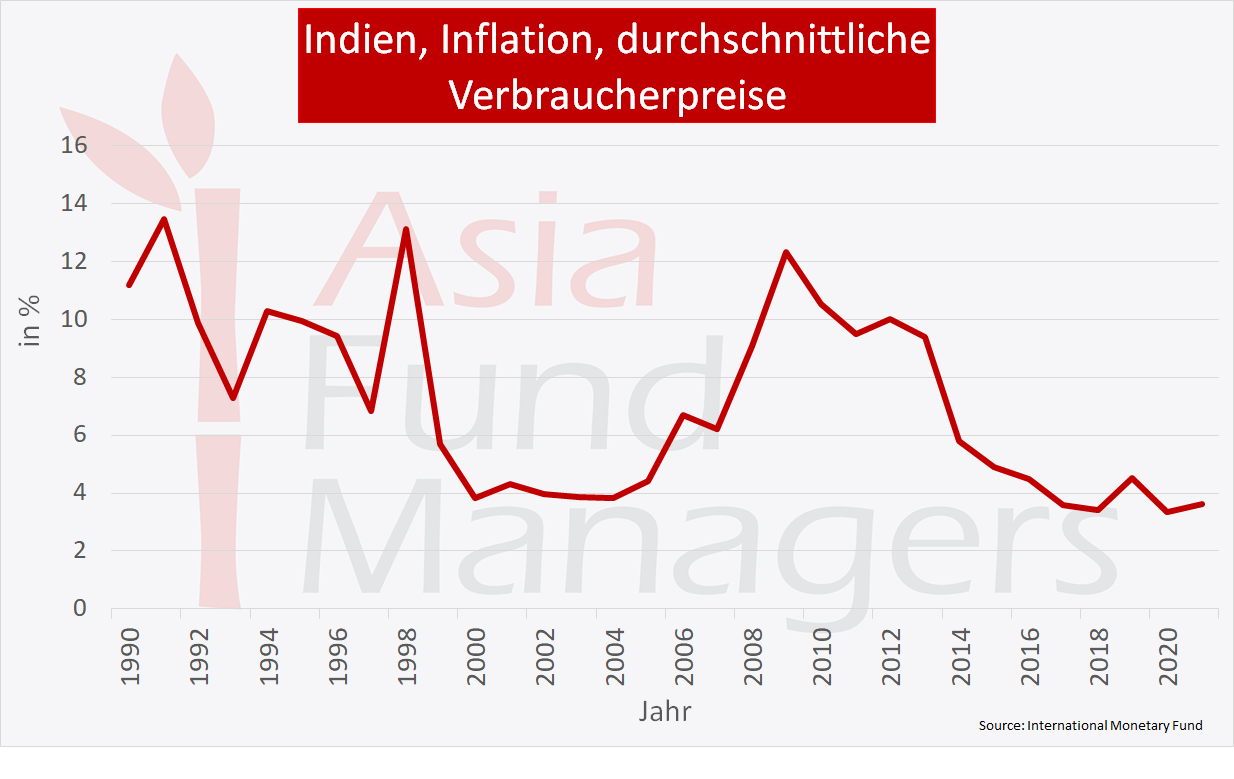 Historically, agriculture has been an extremely important branch of India's economy, both in terms of feeding the population and as an export business. And this is still the case today, because agriculture is still the most important industry in India. Despite the country's rapid industrialization, over 60% of the Indian population live in the countryside and are still dependent on local agriculture. As a result, food grain production in India hit a record $ 284.83 million tons in 2018.

However, the other industries that India excels in are a sign of its continued modernization. India is already one of the most important aviation markets in the world today and is expected to overtake the UK by 2024 and become the third most important market. Annual traffic at Indian airports is projected to reach 420 million by 2020, compared to 308.75 million in 2017-18. The automotive sector is also important to India, while the country's public bank assets are already 1.5 trillion. Exceeded USD.

In the latest Global Competitiveness Index compiled by the World Economic Forum, India fell 10 places to 68th place. According to these numbers, India is one of the worst performing BRICS nations along with Brazil, which ended up in 71st place. While India ranks high in terms of macroeconomic stability and market size, the crime rate is high.

In the World Bank's Ease of Doing Business ranking, India's economy improved 14 places to 63rd out of 190 nations. Compared to the other BRICS countries, India ranks third after Russia (28) and China (31). South Africa (84) and Brazil (124) are in the second third of the ranking.

India still has a lot to do to promote more economic freedom, as it ranks 129th in the Index of Economic Freedom 2019. Among the countries in Asia-Pacific, India ranks 31st out of 43.

By far the most important stock exchange in India is the National Stock Exchange of India Limited, which is based in Mumbai. Founded in 1992, the National Stock Exchange (NSE) has a total market capitalization of more than $ 2.27 billion, just outside the top 10 stock exchanges in the world. Narendra Modi's government excelled at deregulating the stock market, which has helped accelerate foreign investment in recent years.

The main indices in India are the equity benchmark index Sensex and the NSE Nifty. The BSE Sensex lists the 30 largest companies that are traded on the Mumbai Stock Exchange. The broader Nifty lists the 50 companies that trade on the NSE as measured by free float market capitalization.

The bond market in India is divided into two categories - retail and wholesale. The main products traded are bonds, government bonds and stocks. Separate segments are offered for government and corporate bonds, while fixed-term bonds, tax-free bonds, taxable interest-bearing bonds and perpetual bonds are available.

Foreign investors continue to seek greater access to Indian bonds given the high yields. But liberalization is relatively slow, with foreign donors holding only 3.7% of the nearly 60 trillion rupees ($ 835 billion) of government bonds issued by India. This is partly because the government has set a 6% limit on foreign ownership.

According to the India Brand Equity Foundation, the Indian real estate market is expected to be a trillion size by 2030. From USD 120 billion in 2017. But despite this outlook, the sector remains plagued by uncertainty despite attempts to liberalize FDI. The Indian government has encouraged foreign investment in real estate and this sector of the economy is expected to represent 13% of GDP by 2050.

According to global real estate advisor Colliers, investments in India's real estate increased 8.7 percent in 2019 compared to 2018, reaching $ 6.2 billion. About 78% of the total investments of the past year should come from foreign funds.

House prices in India fluctuate rapidly depending on location, with certain areas in Mumbai being more than twice as expensive as any other location in the entire country. In general, India's rural areas are more affordable, although the extent of poverty in the country means that many millions of Indians have no realistic prospect of owning a home.

News, backgrounds and analyzes. The business editor for Asia Investments.
<?