What is a split nut

How can rotation of the tow bar bracket be prevented?

Based on the picture of your towbar that I found and added to your question, you need to change the towbar to make it work. It's designed to spin (I don't think that's a good decision, but that's exactly what they did).

When you have enough clearance between the trailer and your rear wheel / fender, you can rotate the trailer hitch forward and clamp it to the chain stay. I would use a Jubliee clip (hose clamp) and leave it there permanently. The problem with this is that you can't remove the rear wheel without removing the clamp. If the chainstay is sticking out over the dropout it will also bend the tow hitch when you pull up the axle nut, which I wouldn't do.

The other option is to weld a bump / tab to the inside of this clamp as described by Solson. I very much suspect the bracket is made of steel so it's easy enough to weld it on. If you don't have a welder, it will take a metal worker 10 minutes to do this. You will also have to repaint the towbar afterwards. I would buy a second towbar for this since Croozer sells it, and that way you can keep using the existing towbar if you cram it. When you pay, clean as much paint off the entire towbar as you can (welding heats the whole thing up and burns off paint over much of the towbar which is smelly, so if you don't, you're going to pay someone else to do it) ). Then work out exactly where you want the tab and scratch marks along each edge, from the hole in the center to the outside edge (so that they are visible after the weld covers the scratches on the inside surface). The welder inserts a blob that extends past the scratch (molten metal doesn't sit in nice box shapes) then file it back to get nice straight edges that snap in well. If the metal site is able, oil quenching will harden the bracket after welding, which will help. 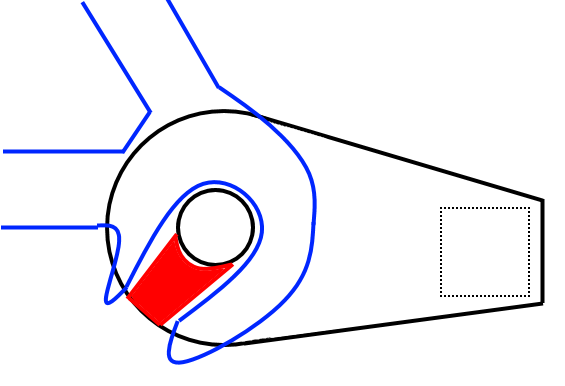 What you are trying to get is the red dot that is added on the dropout side of the towbar so that when you install the wheel it will sit on the slot in your dropout.

@solson, your edit is not a solution that I think is worth the risk. Why not edit it in your answer instead?
<?