How does the underworld of the Indian mafia work

Anyone can do gangsters, underworld and political intrigue. But only India provides the spiritual and historical superstructure for the divine story of a charismatic psychopath - and it is quite complex. Call me biased, but when I heard that Netflix was producing an Indian series called Sacred Games, I immediately thought of a brightly colored ceremony of God and a completely constructed love story. Just Bollywood.

How wrong I was! "Sacred Games" is a flawless underworld series about the political entanglements in Mumbai and the last uprising of an old school gang boss - and the film adaptation of the highly acclaimed novel "The Godfather of Bombay" by Vikram Chandra.

A godlike gangster and a lonely cop 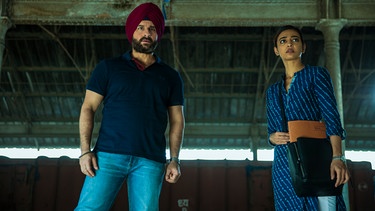 Sartaj Singh is a police investigator in Mumbai. His marriage has failed, his pill use is out of control and now his corrupt boss has suspended him as well. Suddenly his cell phone rings. An unfamiliar voice challenges him. It's Ganesh Gaitonde, a legendary "Bhai", which means "gangster" in Mumbai. Gaitonde sends Sartaj on a scavenger hunt across town and tells him over the phone how he became the most feared gangster in town. When they finally face each other, Gaitonde warns: Mumbai will go under in 25 days. Then he shoots himself - at the end of the first episode.
But that doesn't end Gaitonde's story. Because he continues to tell us viewers his story from the afterlife while Sartaj, the policeman, tries to find out what the warning is about.

As with the Mexican mafia series "Narcos", the country's turbulent history also flows into "Sacred Games". By the way, we keep hearing about political events that have moved India. But Gaitonde also allows mythology to flow into his own narrative.

Ganesh Gaitonde considers himself a god, a "Bhagwan", and immortal. And somehow he is also a god - omniscient and omnipotent beyond his death - because he tells us onlookers from the beyond his story on. Religion is a big topic of "Sacred Games": The tensions between the various religious groups, but also the possibility of using religion to manipulate and incite people.

Gangster series are often very clichéd. The characters are flat, women are rare, and violence is more of a show than a plot. Unfortunately, "Sacred Games" also has these problems. The characters are not nearly as complex as the historical and spiritual structure of the series, which leads you to Wikipedia entries on Indian history again and again, because you just want to read everything again. That does it Watching is a bit more demanding, of course - but the series is all the more interesting. Also otherwise little reminds of the classic-kitschy Bollywood. The look is kept in dirty yellow and green tones and just as cool as the specially produced soundtrack.

The Indian film DNA still comes through every now and then in unfamiliar camera positions and slightly kitschy scenes. Anyone who, like me, is thinking of switching off should try to resist and watch the first episodes to the end. "Sacred Games" may seem a bit strange at times, but that is also a nice change for our otherwise very stuck viewing habits. If you like to try something new, travel the world, read gangster stories and read Wikipedia, then "Sacred Games" is the right place for you.