Which is the largest mouth in the world

The Danube is the second after the Volga second longest river in Europe. The extraordinary river with a length of around 2850 kilometers has an average water flow of around 6855 m³ / s. The entire length of the Danube connects ten countries with very different cultures. From Donaueschingen to Jochenstein, the Danube covers 663 kilometers in German territory.
In addition, it is also very idiosyncratic, because it is the only major river in Europe that flows from west to east and was measured backwards from the mouth. It was and is one of the most important trade routes in Europe. On its long course it takes on all shapes that a river can have: from almost standing water to a torrent.

A river without a source?

In contrast to almost all other rivers, the Danube does not have a clearly defined source. The origins of the mighty river lie in the Black Forest. Two small rivers named Breg and Brigach unite at Donaueschingen to form the Danube. 1.5 km before these two rivers converge, another small stream flows into the Brigach, which has its source in a castle park near the Donaueschingen church hill. In the course of history, residents have argued time and again as to which of these three tributaries is the real source of the Danube. 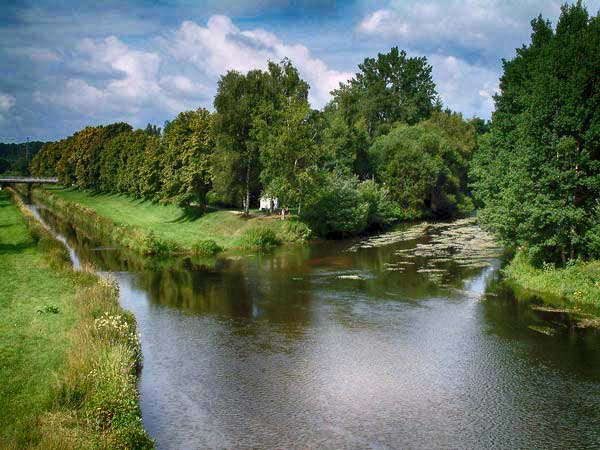 Around 1584 the beginning of the Danube was defined where the castle spring flows into the Brigach. Later, efforts were made to name the Breg as a source of the Danube, as this is the longest of the three tributaries at 45.93 kilometers. This can even be found in school books from the 1960s. In the meantime, the beginning of the Danube at the confluence of the Breg and Brigach rivers is generally accepted - although there are still voices who regard the spring in the Donaueschingen castle park as the "real" Danube spring. This long-running dispute led to the Danube - in contrast to rivers with a clear source - being measured backwards from the mouth. The 2850 km length is measured from the Danube Delta to Donaueschingen and indicated accordingly on the bank stones.

Where does the name come from?

The origin of the name "Donau" used in German-speaking countries and the English term "Danube" is not clearly understood. It is believed that the term "Danube" is borrowed from the language of the Celts who once lived in the headwaters. There was "Dona-aw" for "deep water" and "Do-avv" for "two waters", which could refer to the two source rivers. "Danube", on the other hand, has its origin in the Indo-European "danu", which means something like river. The Romans also had a god of water, they called him "Danubius". In early documents the river is called "Tonach", later also "Donaw" and from 1763 finally "Danube".

The sinking / seepage of the Danube

The "Upper Danube" in Baden-Württemberg is the most pristine part of the river in Germany. Here you can see in impressive landscapes how the Danube moves with difficulty towards the east. The most unusual place is between Immendingen and Möhringen, where the Danube at average. It completely seeps away 77 days a year and is therefore also known as the sinking of the Danube or Danube seepage. A large part of the water seeps into the limestone bedrock. Depending on the season, all of the water in the limestone rock disappears. The river bed behind it is completely dried out. The seeped water flows through a cave system that has hardly been explored to this day and comes to the surface again in places twelve kilometers further south than Radolfzeller Aachquelle. The other part then comes to the surface again from Möhringen and runs again in its river bed as the Danube to the east.

Basically, the "Upper Danube" is a relatively calm body of water. In some places one cannot give the impression that it is even standing. Therefore, the Danube is relatively uninteresting for water management in this area. Because as a waterway it is neither deep nor wide enough. And the Danube can only be used to a very limited extent for generating energy. Accordingly, there was less interference in the landscape, which is why the Danube in Baden-Württemberg in its originality is a special attraction for tourists today.

The Danube gets work

In Bavaria, the Danube is slowly taking on the dimensions of a real river, which is why it is also interesting for the economy: From Ulm, the river is "navigable" and is also used by the energy industry. The water is used, among other things, to cool power plants. First barrages and weirs change the natural course. From Kelheim, a good 20 kilometers from Regensburg, the Danube is wide enough for large ships. The Main-Danube Canal also starts in Kelheim, creating a continuous connection from the North Sea to the Black Sea. Serious interventions in nature were undertaken to enable international shipping. The river was straightened, natural landscapes disappeared.

Through the old Danube monarchy

In Austria at the latest, the Danube will become one of the most important trade routes in Europe. Already in the Middle Ages there were around 80 toll and customs stations for ships. On the approximately 350 kilometers of the Austrian Danube, narrow gorges alternate with wide valley landscapes. One of these broad plains is the Vienna Basin. Hardly any other city is so closely connected to the Danube as the Austrian capital. Whether the Danube Monarchy, the Danube Wave, the modern Danube City or the old Donaustadt district: In Vienna, many things are adorned with the nickname Danube. In 1867, Johann Strauss even created a musical monument for the river with his Danube Waltz, which soon became Austria's secret anthem.

After Vienna, numerous other cities are shaped by the great river. The Slovak capital Bratislava, for example, was for a long time the capital of the Kingdom of Hungary under the German name Pressburg because of its strategically favorable location on the Danube. It was not until the Turks were slowly pushed back from Hungary in the 17th and 18th centuries that Pressburg lost its importance and Budapest took its place. Today's largest city on the Danube is one of the most impressive metropolises along the river. The most beautiful buildings in Budapest are almost all on the banks of the Danube, including the Parliament, which was inaugurated in 1904 and is one of the largest buildings in the world.

The Serbian capital Belgrade was also in great demand for centuries because of its location on the Danube and the Sava. The "Gateway to the Balkans" was the linchpin between Central and Southeastern Europe. The fortress towering over the city testifies to the historical importance of this junction.

The long way to the Black Sea

The Danube covers by far the longest part of its route in Romania, mostly as a border river to Serbia and Bulgaria. The Romanian part begins spectacularly: The "Iron Gate", a breakthrough valley on the Serbian border, has long been considered the most dangerous section of the Danube. Since it was defused with the help of a dam in the 1970s, large ships have also been able to pass it comfortably.

In the east of the country, the river, which has become wider and wider on its journey and is now flowing slowly, branches into a wide delta. The second largest river delta in Europe after the Volga Delta is best known for its unique nature. More than 5000 different animal and plant species live in Europe's largest wetland. In 1991, Unesco declared the approximately 5000 square kilometer area a World Heritage Site.