PTFE in industrial use

Anyone who does sport or is out and about in the rain appreciates functional clothing that repels water and is breathable. We welcome glasses that are easy to clean or pots that do not burn anything. But polytetrafluoroethylene (PTFE) is not only valued in the private sector, industry also uses this high-performance plastic in a variety of ways. Of all fluoroplastics, PTFE is by far the most frequently produced with a share of 52% and a production volume of 140,000 t per year (as of 2015).

The discovery happened by accident ...

The myth that PTFE was developed for space travel continues to this day. Although the heat protection tiles of the Apollo capsules were actually equipped with a protective layer made of these polymers, this plastic was discovered much earlier. In 1938 the research chemist Dr. Roy J. Plunkett (1910 - 1994), who worked for the US chemical company El du Pont de Nemours & Company, searched for a new coolant for refrigerators and also experimented with tetrafluoroethene. He kept the colorless and non-toxic gas, cooled with dry ice and under high pressure, in bottle-shaped cylinders. Polymerization occurred in one of these cylinders.

When Plunkett examined the white product, which appeared overnight, he found that it was not attacked by any chemical, neither by hot acids and alkalis, nor by any solvents. In 1941 a patent was applied for polytetrafluoroethylene, which has been produced and exclusively sold by DuPont under the brand name Teflon® ever since.

In 1943, for the "Manhattan Project", the secret military project for the development and construction of the American atomic bomb, corrosion protection was sought for the containers in which uranium hexafluoride was to be stored. Only the polymer found by Plunkett turned out to be suitable.

After the Second World War, the area of ​​application was expanded to include civilian applications and so it also found its way into the kitchen. The engineer Marc Grégoire and his wife Colette came up with the idea of ​​coating frying pans and saucepans with it. The idea caught on and both founded a company under the brand name Tefal® that from then on used this coating technology. The triumphant advance of PTFE as an almost indestructible plastic began. Its inventor, the American chemist Roy J. Plunkett, was highly honored and in 1985 was inducted into the "Hall of Fame" for the most important inventors.

The starting material for all fluorinated polymers is fluorspar (CaF2). In a first step, sulfuric acid turns this into hydrofluoric acid (HF) and calcium sulfate (CaSO4) implemented. In a second step, the hydrofluoric acid reacts with chloroform (CHCl3) to tetrafluoroethylene (F2C = CF2), which converts to polytetrafluoroethylene in a free radical polymerization reaction in aqueous solution.

Although polytetrafluoroethylene is a thermoplastic, it cannot be further processed using thermal processes, because before it melts, it begins to decompose at temperatures above 400 ° C. 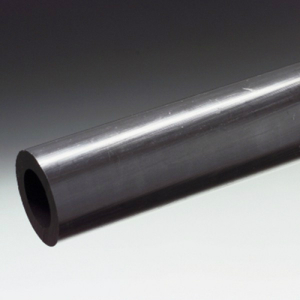 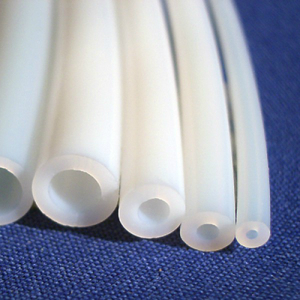 Not vulnerable and very stable

Polytetrafluoroethylene has a special position among plastics. Only elemental fluorine and molten alkali metals attack this plastic. It is inert to all other chemicals. Weather conditions, UV radiation or ozone lead to aging and embrittlement of many plastics, but not of polytetrafluoroethylene. 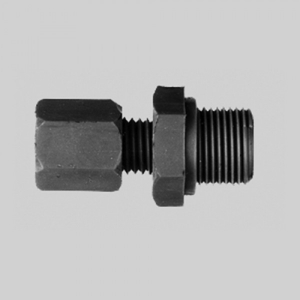 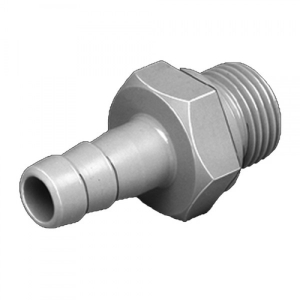 Components made of this plastic are corrosion-resistant and can be used in continuous operation over the wide temperature range from -200 ° C to +250 ° C. These properties are particularly valued in chemical plant engineering and polymer coatings made of PTFE are used for containers or pipes. Hoses, seals and fittings made from this polymer are also used in a variety of ways.

Polytetrafluoroethylene has had FDA approval for the food sector since 1960 and is used for hoses or as an inner coating for pipes and containers. The same applies to the pharmaceutical industry and biotechnology. In medical technology, not only tubes, but also stents and housings for pacemakers made of polytetrafluoroethylene are used. Because this material is not only physiologically harmless, but also anti-adhesive.

Due to the extremely low surface tension, neither liquids nor solids adhere to it.

The coefficient of friction of PTFE is extremely low - the material is literally "slippery". This feature is very useful when low-friction sliding is required. The industry therefore uses coatings made of the plastic for slide bearings or conveyor belts. 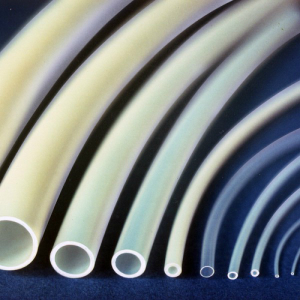 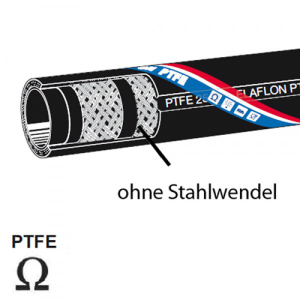 Due to the low coefficient of friction, there is also a “self-lubricating effect”, which means that no lubricants are required, which also saves costs. The sliding back, the so-called "slip-stick" effect, which occurs when the surfaces of two bodies move against each other, is also greatly reduced. Finally, the polymer is also used for the sheathing of wires or cables in electrical engineering, as it is not only thermally stable but also electrically insulating.

But PTFE has a significant disadvantage compared to many other plastics: Even under low pressure loads, the plastic is no longer dimensionally stable. Cold flow, this is the name given to the irreversible deformation of materials under pressure, and “creeping” under pressure are two undesirable properties of plastic. Because seals should not only be resistant to a large number of chemicals, they should also retain their shape under pressure.

The addition of fillers can improve the properties of PTFE and also prevent cold flow.

Graphite, for example, increases compressive strength and hardness, improves sliding and wear properties and reduces surface resistance, which is important for slide bearings, valve seats in chemical apparatus construction or in general for structural parts with antistatic requirements. PTFE compounds can also contain fillers such as ceramics, glass or organic fillers such as polyimide (PI), polyetheretherketone (PEEK) or polyphenylsulfone (PPSO2). 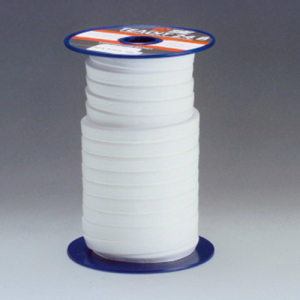 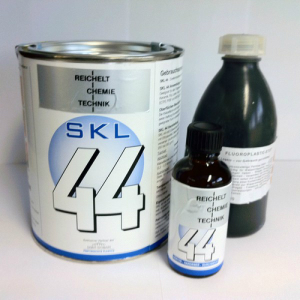 Due to its chemical inertness and hydrophobicity, joining workpieces made of polytetrafluoroethylene is not that easy. Pressure welding, a process in which work is carried out under high pressure and at temperatures between 370 ° C and 390 ° C, is the only welding process that is suitable for PTFE. 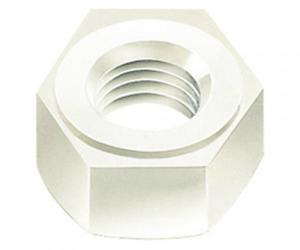 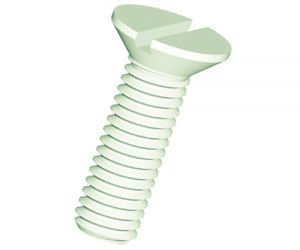 For the gluing of workpieces, a special pretreatment of the joining surfaces with a so-called primer is necessary, which chemically roughen the smooth, hydrophobic surface so that a firmly adhering, stable adhesive bridge can form between the workpieces. Industrially proven PTFE adhesive kits based on epoxy resins, cyanoacrylates or synthetic rubber are now available for secure adhesive connections.

From recycling to a closed cycle

The reason for this is the large number of chemically very different plastics that can only be made usable again if they are sorted by type.

Thermal recycling makes little sense for pure PTFE waste, because apart from the low calorific value of PTFE, highly corrosive and toxic fluorine compounds such as hydrogen fluoride, trifluoroacetic acid and fluorophosgene are created, which require a complex, chemical post-treatment of the combustion gases.

However, since PTFE is often used as a coating on metals, such as PTFE-coated pipes or sheets, the thermal treatment of such metal scrap before melting down is inevitable. This work is carried out in specially designed systems. 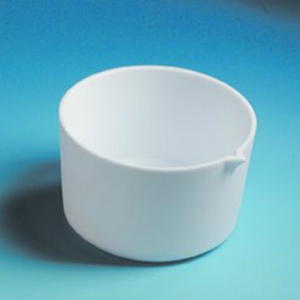 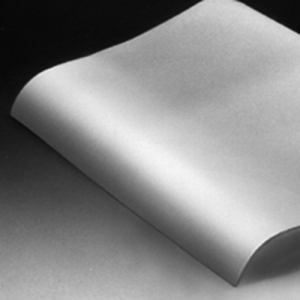 The recovery of PTFE from common plastic mixtures is less problematic due to the high specific weight of the plastic and can be technically well implemented, for example, using flotation processes. Such PTFE is usually so heavily contaminated and, as a compound, also contaminated by additives that its recycling reaches its limits. It is therefore mostly only used as an aggregate in construction.

As early as 2010, the Chair of Materials Processing at the University of Bayreuth presented a process in which PTFE waste is broken down into monomers and fed back into the production process.

The process is not only suitable for processing pure polytetrafluoroethylene waste, but also for PTFE compounds and mixed waste containing PTFE.

The process thus creates a closed cycle, which is not only ecologically required, but also makes economic sense.