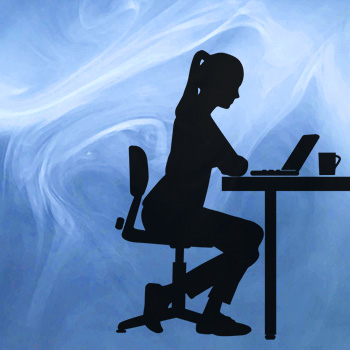 We all have our own sensitivity to unpleasant drafts, but as a rule we can assume that we perceive the disturbing draft when the air speed is more than 0.2 meters per second, which is about four times slower than a walking one Person. In winter it doesn't take much for a corner in the apartment or office to be perceived as uncomfortable - the cooler the draft is the draft becomes all the more uncomfortable felt, even if it should only be very weak. It is worthwhile to detect and reduce drafts in a heated building, because draft increases energy consumption in an indirect way: The cool draft prompts the residents to turn up the heating to compensate for the feeling of cold.

With a light ribbon

This process consists in making a kind of fishing rod made of a stick to which a very, very light "thread" is attached: for example a thread of wool, a silk ribbon, a piece of magnetic tape (from an old audio cassette) or a strip of multilayered tape Toilet paper from which a layer has been torn off, or something similarly light.

The colorful tubes for making Soap bubbles can be bought at the kiosk or in stores that have a toy department. Soap bubbles are very effective in recognizing large air movements (e.g. running up stairs). But be careful, they can leave a sticky residue if they burst.

There Incense sticks Burn very slowly, they create a visible thread of smoke that can be used to indicate where there is draft. Hold the incense stick at arm's length and slowly move along the windows and walls. Move back and forth carefully so as not to affect the draft. This method is also suitable for checking the functionality of the ventilation grilles for the exhaust air from the kitchen, bathroom and toilet. Is the apartment with Fire alarms equipped, be carefully, in order to no alarm is triggered!

Unfortunately, the reason incense sticks give off visible smoke is that they are so many Fine particles release. Aside from determining where the draft is coming from, for the sake of your health it is better not to let it burn down around the house.

This is also one of the professional instruments Anemometer (in German anemometer), which was specially developed for measuring low air velocities inside buildings. They can be used to record and characterize air flows or to regulate the air flow rate of ventilation systems. 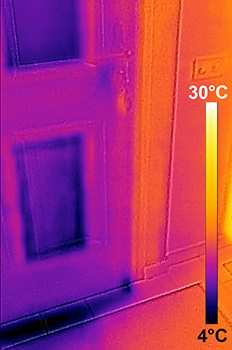 Recording a Entrance door in winter from the point of view of a thermal imaging camera. The cold air that penetrates under the door cools the floor tiles down considerably.

In winter you can also do one Thermal camera to make the penetration of cold air visible, because this cools the material around the cracks or the leaks of doors and windows.

But even without technical aids, you can detect a draft: Sometimes there are spider webs in places where the air currents are strongest: Spiders settle there because the air movements drive the flies and mosquitoes directly into the trap ...

Old building: Defects in the window seal are part of the building ventilation

In an old building that has not been renovated, some of the air is renewed through leaks in the building. In most cases there are no ventilation grilles: "Fresh" air enters through leaky windows and the door that does not close tightly. Used air is directed outside through the extractor hood in the kitchen or suction openings in the bathroom and toilet. However, over time and as the building ages, the windows let more air through, and cold air also enters through cracks in the walls or along the pipes. Air can even flow out of the electrical sockets as well as the openings in the ceiling from which the electrical cables for the lamps come.

In an old, non-renovated apartment of around 100 square meters, the sum of all cold air inlets can correspond to an air exchange that takes place through a small, constantly open roof hatch the size of an A4 page - which by far exceeds the normal ventilation requirement. It is generally assumed that the air in a living space moves at a rate of 30 m3 has to be renewed per hour and person - which corresponds to a flow of air that gently enters through a hole 5 centimeters in diameter.

Modern building (well thought out and high quality built): walls and windows close tightly and the air exchange is controlled by an automatic ventilation system

A well-built modern building (or a well-refurbished old building) not only has very good thermal insulation, but also is sealed against air inlet. Therefore, the air renewal is usually carried out by a ventilation system, which introduces fresh air through grille inlets into the bedrooms and living rooms and sucks the stale air through other grille openings in the kitchen, bathroom and toilet - i.e. from the rooms in which most of the pollutants and the highest levels of humidity arise. If one speaks of "comfort ventilation", a heat exchanger is also included, which makes it possible to transfer the heat from the exhaust air to the cold fresh air supplied from the outside. But drafts can also occur in such a building, for example if the ventilation system supplies too much air, or if the residents intentionally close the ventilation grilles (or unintentionally adjust them with furniture) and thus disrupt the circulation of air between the rooms. But if the air circulation in the apartment is not working properly, the airflow is concentrated in certain places and creates an unpleasant draft ...

Unfortunately, this solution is found very often: The old building was provided with new, well-insulating and tight windows, but no new air inlets were installed. If the exhaust grilles in the kitchen, bathroom and toilet still suck in a lot of air, drafts can occur under the entrance door or through cracks. Ventilation slots on the new windows should be considered for the benefit of the health of the residents and of course also to avoid problems caused by moisture, which can promote mold on the cold walls. There are automatic, hygrostatically controlled ventilation controllers (without batteries, without electricity) that open or close according to the room humidity.

However, only insulating the façade can solve the problem of cold walls and moisture from condensation.