What is the motherboard made of

Essentially, the equipment of the motherboard determines the system performance, expandability and future viability of a computer system. Most motherboards are tailored for a specific application with a specific processor. So you can't use just any processor on every motherboard. The use of a processor depends on the motherboard or the processor socket and the chipset.

Example of a motherboard 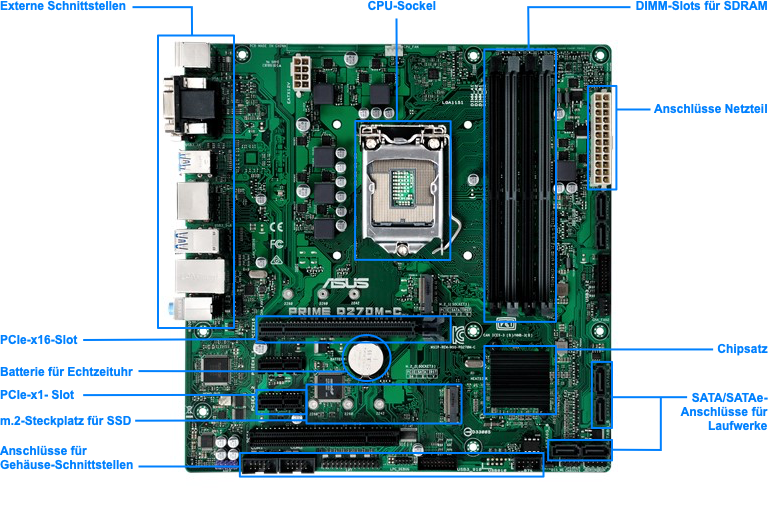 Overview of the system components on a motherboard

Different system components can be found on a motherboard depending on the design, equipment and integration density.

The central element on the motherboard is the chipset, which has developed over the course of time from many individual components to a few highly integrated circuits. The chipset is the link between the individual system components of a computer. No matter what happens in a computer, the chipset is always involved. It ensures that all components can communicate with one another via different interfaces. Different voltage levels, clock frequencies and protocols are taken into account and converted to one another.

In the early days of computers, many interfaces could be found on additional expansion cards. It was only through the increasing integration density of the circuits that many interface controllers found their way onto the motherboard and then into the chipset. This leaves the expansion slots free and can be used for other purposes.
Typically, sound cards, network adapters and graphics cards are integrated "onboard". As a rule, onboard components can be switched off in the BIOS and more powerful interfaces can be retrofitted using expansion cards. This is typically done with graphics cards.

Everything you need to know about computer technology.

Everything you need to know about computer technology.