Trump? Biden? Wall Street takes what it can get

Roger Altman is confused. "The markets surprised me quite a bit," said the founder of the Evercore investment firm on Wednesday when the CNBC host asked him for an assessment. Actually, the markets had hoped for Biden's victory and with him a strong economic stimulus package, said the 74-year-old shortly after the start of trading. "But now prices are apparently rising because of the prospect of split power structures in Congress."

It's not just Altman who looks at Wall Street in amazement this morning. Also many experts who recently believed that America's investors would mainly focus on a so-called blue wave, so thump the takeover of Congress by the Democrats, were taught better. Although the Democrats' favorite landslide victory failed to materialize, the markets celebrated as if they had achieved their goal. The Dow Jones was able to gain 2.9 percent at the top - and thus achieve the strongest post-election performance in 120 years. 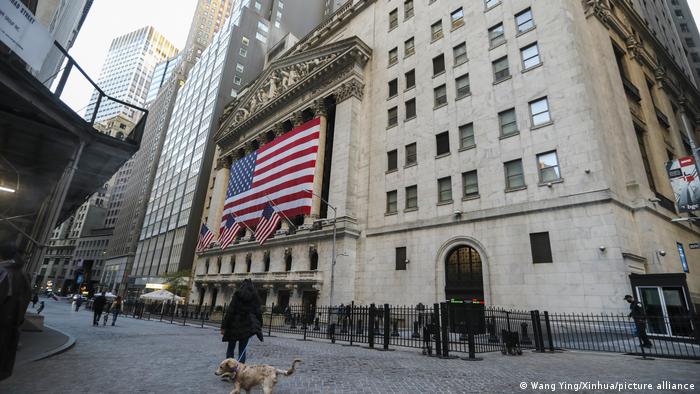 A lot of excitement inside, just a few strollers in front of it: Wall Street the day after the election

If necessary, the FED has to act

"It looks as if the investors would also be satisfied with a divided congress," writes Barry Bannister, Head of Institutional Equity Strategy at the financial services provider Stifel, in an analysis on Wednesday. Above all, the increase in capital gains tax feared by investors is now off the table, now that the Senate remains firmly in the hands of the Republicans. The prospect of a comprehensive stimulus package is now lower, which could jeopardize an economic recovery. "The markets hope, however, that the US Federal Reserve will step in if fiscal policy aid comes more slowly than hoped."

The worry that Biden could regulate America’s tech companies more closely or even smash them in the event of a victory is a thing of the past with a mixed congress. Accordingly, the high-growth tech stocks in particular were able to take off. Shares in Facebook and Alphabet, Google's parent company, gained a good eight and six percent respectively by the end of trading. In the end, the Nasdaq Composite technology exchange was even four percent higher, making it stronger than ever on the day after a US election.

Increased uncertainty could weigh on markets

On the other hand, cyclical stocks and value stocks came under much more pressure. They suffered from the dwindling likelihood of a strong stimulus package. Industrial and materials stocks, which would have benefited from a sweeping attack by the Democrats in Congress and the prospect of Biden's infrastructure program, also failed to hold up. In addition, America's utilities and banks ended the day after the election in the red. Stars and Stripes have to be, no matter how: Dealers on Wall Street

In the eyes of Wall Street, however, an election decision as quickly as possible is even more important than the majority in Congress. Biden's victory is currently emerging. Even a supposedly clear result is by no means a trigger for a stock market rally, say experts. "Many investors currently still believe that the election will be completed in a few days," says Arian Vojdani, investment strategist at MV Financial, the Reuters news agency. "However, heightened uncertainties such as possible legal proceedings around the election could shake the current market optimism."

Party membership of a president "not so important"

The US election in 2000 shows that Wall Street is likely to collapse in the event of a contested election result. For five weeks, then-presidential candidates George W. Bush and Al Gore fought for decisive votes in the state of Florida. While the United States Supreme Court eventually made Bush the winner and Gore the loser, there was no sign of breathing on Wall Street. By the end of the year, the S & P500 fell eight percent, the Nasdaq Composite even around 20 percent.

In the long run, however, the markets should benefit - regardless of who conquers the White House and when. "History shows that a president's party affiliation makes little difference when it comes to long-term returns," said Chao Ma, wealth strategist at Wells Fargo, at CNBC. The state of the economy and US corporate profits are much more important drivers than the White House party. "We expect that will continue to be the case beyond this year's election."