The longitudinal dynamics of the Tesla Roadster S.

The most descriptive quote right at the beginning:

Nothing is more subjective than an objectivity that is blind to its own subjectivity. - Ronald D. Laing

What does this have to do with the longitudinal dynamics of the Tesla Roadster S? Well, I've driven a lot of electric cars myself, including the Opel Ampera ‘like Formula 1. Yes, such an electric car is already moving forward, without a doubt. If you look at the Tesla Roadster S, especially the reports about it, then it becomes clear: Wow, that's a rocket, the concrete rolls off the road, it's so incredibly fast, unimaginable. 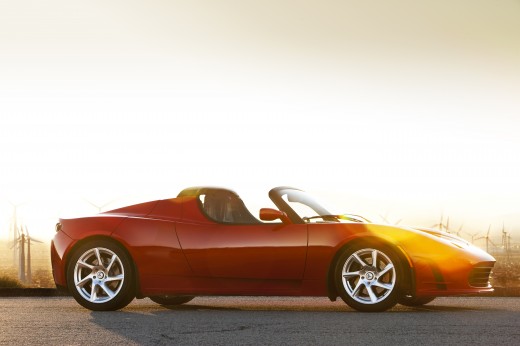 But to outsmart subjectivity, you can also calculate a few things. The numbers cannot be tricked, they are objective and you can compare the acceleration with them.

The built-in engine forms the basis of vehicle acceleration. According to Tesla Motor Company, a three-phase asynchronous machine is used in the roadster, which is controlled by power electronic frequency converters (IGB transistors). The speed / torque setting works according to the principle of voltage-frequency control (U / f control). This results in the characteristic engine curve of the Tesla Roadster 2.5. 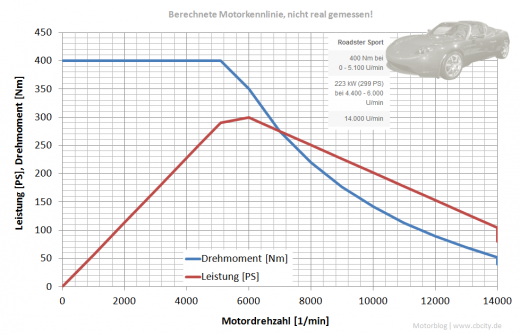 What is particularly noticeable is the completely different characteristic compared to an internal combustion engine. This electric machine already has maximum torque from speed 0. However, it can also be seen that the power drops from approx. 6000 rpm. This is a strange thing, because one is used to the internal combustion engine that the power increases continuously until shortly before the rated speed.

A multi-stage transmission, which converts the speed and torque for the wheels, is not necessary. The Tesla Roadster only has one fixed gear.

I've already written something about the acceleration of vehicles. This time I want to try the same thing, just from a different direction, because it seems easier to describe it that way.

The acceleration with which a vehicle can change its speed at a certain speed (in the sense of getting faster) depends on the torque of the motor (M), the gear ratio (i), the inertia (J), the air resistance and the vehicle mass (m). This physical model is not exact, but sufficiently accurate to be able to estimate how a vehicle accelerates.

Pulling force on the wheel

The torque generated by the engine is converted via the gearbox and passed on to the wheels. A force, namely the tensile force, is generated there by the tire radius.

A few forces now counteract this pulling force. On the one hand the air resistance, on the other hand the vehicle mass in the translational direction and the inertia of the drive train and wheels in the rotational direction.

The air resistance is well known and depends on the air density, the frontal area of ​​the vehicle, the drag coefficient and, above all, the vehicle speed.

The rolling resistance is rather low, but is still included.

The most complicated are the rotational inertia. These values ​​are nowhere to be found. The manufacturer can calculate it from CAD data, but will probably not publish it. It is therefore difficult to determine something exactly here. But you can simply add the rotational inertia to the translational mass via the radius of gyration (see acceleration resistance).

With these values ​​one can estimate the acceleration ability (a) of the vehicle at the respective speed (corresponding torque). 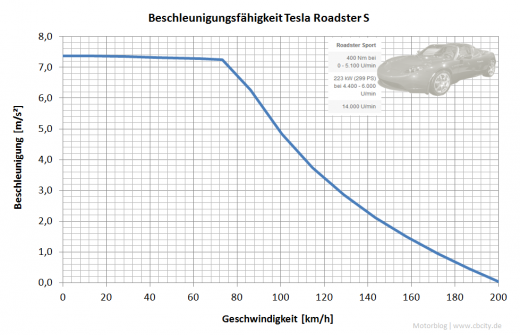 The characteristics of the engine can be seen at first glance. Logical, because it drives the vehicle. It is particularly interesting that the maximum acceleration is "only" around 7.4m / s² and thus on the level of a VW Passat 2.0TFSI in 1st gear.

The speed resulting from this acceleration can be obtained by numerical integration. 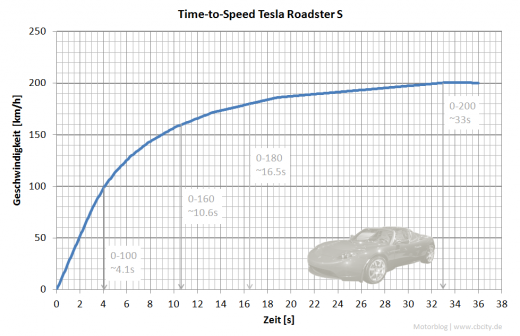 That the assumptions for the acceleration are halfway correct shows the agreement with the measured times of Auto-Motor-Sport.

Are there any real measurements for 0-200km / h with a V-Box, GPS or similar to validate the calculation? If a Tesla Roadster driver looks at this post: I would be very interested in a measurement. Maybe something can be arranged?

Comparison with other vehicles

But that's not the overall picture that needs to be conveyed. All these calculations were actually only made because one thing surprised me: Tesla Roadster S sets the best time for electric cars at the Sachsenring with 1: 51.038. This lap time is roughly in the VW Passat 2.0TFSI category on the Sachsenring, so nothing with a ‘Porsche Killer’. It looks similar on other routes: Tesla Roadster at Bedford Autodrome West on par with VW Scirocco 2.0TFSI.

The acceleration ability of this 2.0TFSI in the same graph: 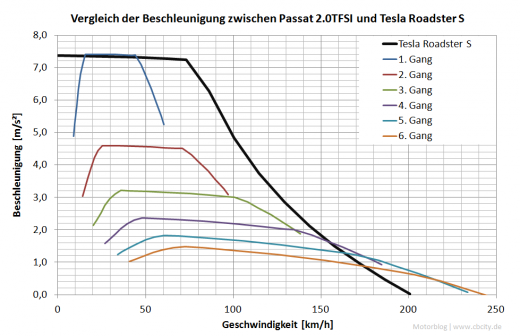 In other words: Just because the 0-100 time is terrific doesn't mean that you have a ‘Porsche killer’ in front of you. Electric vehicles have different acceleration characteristics. In the last few decades people have become used to the fact that if something is really nimble, then it is also loud. If an electric vehicle without a large TamTam accelerates at 7m / s², it looks martial. But it is still only 7m / s². The same 7m / s² as in a car with a combustion engine. It is a subjective feeling that the electric vehicles accelerate much better because they do it silently and without prior notice (in the sense of a high-revving internal combustion engine).

It is also strange that the power does not increase with increasing speed (from the field weakening area). You are not used to that from the internal combustion engine and it has an effect especially when you are used to acceleration ‘in the city’, but then drive onto the country road and want to overtake there. Anyone who has ever driven an electric car will confirm this (see also ‘only works up to 130km / h‘). It takes a lot of getting used to and sometimes dangerous if you don't expect it and want to pass by quickly with your ‘Porsche Killer’.