Sparse woodland covers the high plateaus and valleys of the Ugalla region in western Tanzania. Glowing hot, bald and brown during the dry season, it offers the animals and people living here a miserable livelihood at times - especially if they have high nutritional requirements. And yet the cradle of mankind could once have looked like this: Under a similar climatic and ecological scenario around five million years ago, a primate originally living in the dense forest is said to have got up on two legs and then conquered the world.

Only changed tastes could make this possible for the hominids: In contrast to the original moist rainforest, food was no longer always available, fled or hid behind strong shells and hid in the ground in order to survive unfavorable phases. Fossil teeth and jaws testify that about three to four million years ago the preferred diet changed and more vigorous chewing was appropriate. Flexibility and skill were required in order to use the available resources profitably. Ultimately, they revolutionized the brain as well as the intellectual abilities of human ancestors and stimulated them to grow in size.

Instead of fruits and easy-to-eat insect larvae, nuts and high-energy meat were now on the menu, but underground storage organs of plants could also have played a role - but opinions differ widely. Because in contrast to rudimentary stone tools for cracking nuts or cutting meat and their traces on worked bones, so far nothing has been found that would have been suitable for effective excavation work. Devices of this type were probably urgently needed back then, as the soils in this hot area dry out rock-hard on the surface - onions or tubers were not accessible to the australopithecines with their hands alone.

Was that why the nutrient-rich plant parts were eliminated as an evolutionary turbo? Or is there simply a lack of evidence for the earthworks necessary to produce food - for example because the aids used were ephemeral and weathered without a trace? The chimpanzees of the Ugalla forest could now perhaps clarify these questions somewhat, if the observations of primate researchers around Travis Pickering from the University of Witwatersrand in Johannesburg are confirmed.

During her research on the small local population of Pan troglodytes schweinfurthii, the most easterly subspecies of the chimpanzees, they repeatedly discovered numerous strange holes in the floor directly under the animals' sleeping places. At the same time, chewed-out or thickened tufts of fibers from roots and tubers were scattered around the area, which suggests that the plant parts were consumed lively - including, for example, the East Indian arrowroot (Tacca leontopetaloides) also species used by humans and others similar to raw potatoes. Since there were no other mammalian traces to be found than those of the monkeys, the chimpanzees really did the work on the ground and the subsequent meal.

"Underground food was within reach for the early hominids"
(James Moore)

But the primates did not break into the ground with their bare hands to get the nutritious food. Because at three of the eleven processed deposits, the researchers came across natural tools that had apparently been used as a pick and shovel: including wooden sticks with worn and dirt-encrusted tips on the thicker sides and pieces of bark that had probably been used to scratch the surface of the earth - for the scientists provide clear evidence that the primates have tapped another technical innovation for themselves. Shortly before, another group of researchers in Senegal, West Africa, had seen chimpanzees hunt smaller monkeys with spears.

In Ugalla, however, direct observations of burrowing chimpanzees are still missing. Nevertheless, conclusions can be drawn from the evidence about the life of the australopithecins, who had a similar brain size and hand shape: "We cannot infer linearly from this that our ancestors acted the same as the primates today. The Ugalla chimpanzees, however, suggest that underground food was available for the early hominids, "said James Moore of the University of California at San Diego, who was involved in the work.

"This is shaking our current hypotheses"
(James Moore)

Only one thing doesn't quite fit into the picture. Theoretically, the monkeys - like the australopithecines - should only resort to the hard-to-reach diet in times of need. But the animals did not adhere to this, they only tasted the food from the earth during the rainy seasons, although there was no lack of more easily accessible food all around. "This shakes our current hypotheses about what these plant parts meant for the development of hominids," comments Moore.

However, some of the roots we are looking for have pharmaceutical value, so the chimpanzees may want to use them as a natural pharmacy rather than a stomach filler. But there is also a less romantic explanation: the floors of Ugalla baked so hard during the dry season that the researchers could hardly break them open even with modern tools. 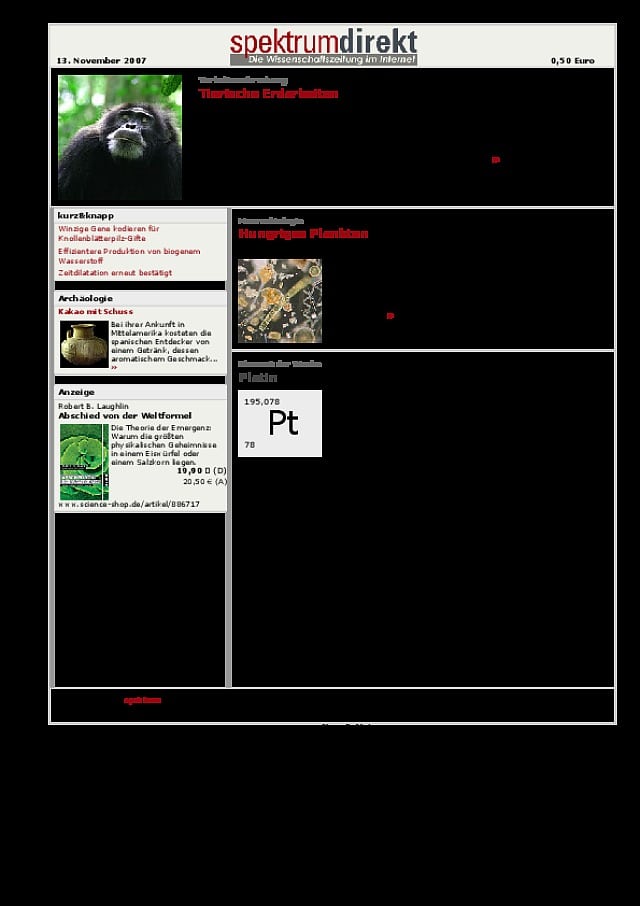 This article is contained in Spectrum - Die Woche, November 13th, 2007